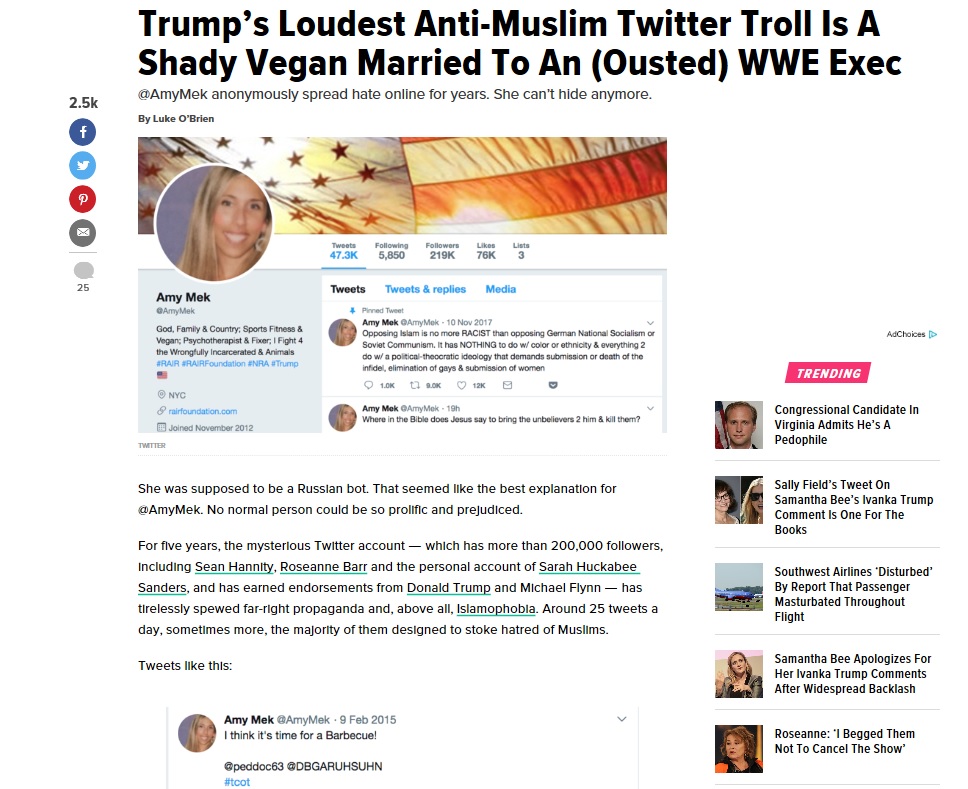 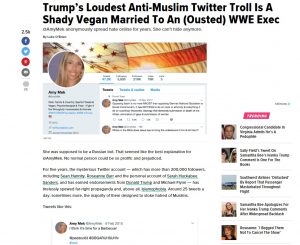 A partisan reporter on HuffPost, a Guerilla Ninja, has attacked @AmyMek one of our MAGA family. He wrote a long article, disclosing the real names of her & her husband’s & their address, he called her husband’s employer & made him fire him. This person’s name is Luke O’Brien.

This man definitely needs a lawsuit. There is no way that he obtained her information legally. She didn’t break the law and hasn’t committed any crime. FBI was not after her. Bringing conservatives down has reached a new level.

It has gone beyond boycotting ads & sponsors or making accusations to cancel TV shows or university speech events. Now they are bringing down normal people & exposing their personal information. Reading the vicious comments under her post reveals the liberal insanity has no limit.

If we don’t take these incidents seriously, we will be the next one. You or me, anybody can be a target. The article is clearly written in favor of two dangerous entities: CAIR & George Soros. It implies it is a crime to say Soros has a role in overthrowing countries.

And It also implies it’s a crime to claim CAIR has a role in Muslim extremist gangs. It also says the phrase Cultural Marxism is a Nazi slogan! Never heard such stupid thing in my life. Apparently, the Guerilla reporter has no idea what’s Nazism or Marxism but he has no shame to hide it.

@siderblaze2 has done a great job. Twitter in compliance with the doxxer, deletes Amy’s tweets (just like they do with all conservatives and Trump supporters). He dedicated his time to record tweeter deleting Amy’s tweets in real time. Watch:

Watch @AmyMek retweets get deleted in real time. From almost 4,771 to 3,150 #maga pic.twitter.com/y5YGulYUW8

Just read the article and see how hateful and vicious it is. In every single phrase, there is an accusation. What is the crime? Being President Trump’s fan and having a big reach.

Luke O’Brien is a public figure. He has doxxed a private citizen.
He did the same thing to Ricky Vaughn. Do you remember him? His account has completely disappeared.
Remember the reporter is a public figure so any information on him can be public. If doxxing is not a crime, the doxer needs to be doxed. 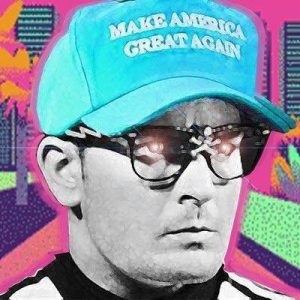 This was Ricky’s profile picture if you remember. He is actually handsome and attractive and that maybe one of the reasons he was attacked that much. His big account was very active during the election. 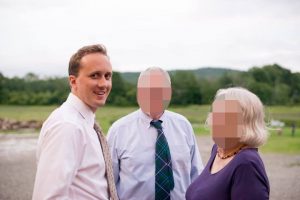 The photos are all over the internet because of the rampant so-called reporter who ruins people’s lives.

This is the article about Amy which with every word, seems the doxer is spitting and writing. Click here to read.

And this about Ricky.  Does he doxx for a living? Read the article here.

The only way is the legal way
The only language is the language of the law
The Law doesn't care about Ur petitions, tweets or emotions
The law only recognizes the law
Rain the lawsuits over them!#QAnon #WeThePeople #GreatAwakening #TrumpArmy #InternetBillOfRights #FreeSpeech pic.twitter.com/38mXEG1BhR

Amy has asked from all people in along thread fighting for her family.

ALERT! I NEED YOUR HELP – This is SHOCKING!

The attack has grabbed the attention of all activists.

This is the left’s modus operandi now https://t.co/aex5yWqego

The left destroys human lives. The @HuffPost smears, defames, libels anyone who dissents. @AmyMek isnt a public figure. She’s a patriot who tweets and has amassed a huge following. So they will shut her up, destroy her and her family.
Communist China
Nazi Germany
Soviet Russia https://t.co/bWehkWx97p

Today was a Gawker moment for HuffPo. Doxing an anonymous Jewish woman was bad enough. Targeting her entire family for death threats….incomprehensible.

The Huffington Post has doxed a Jewish woman, @AmyMek, who has been receiving death threats.

Very wrong what HuffPo has done to @AmyMek and her family. They are confusing journalism with hate campaigns

Hamas-linked CAIR’s @ZahraBilloo endorses the doxxing of a private citizen exercising her First Amendment rights, endangering the lives and livelihood of this woman and her family. https://t.co/VWnZyHxKEw

Wow. @HuffPost is resorting to doxing. They have zero boundaries. It’s dangerous to be a conservative these days. https://t.co/FnSXFlhNsn

I love @therealroseanne too.

Why do conservatives just sit back and watch as liberals sabotage our people? When is the Right going to FIGHT BACK?!?

You have to fight fire with fire. Wake up. This is #War.

A crime becomes a victory & I hear leftists noises. Clapping ceremonially, making satisfaction yells like Karate, hovering around the doxer like mosquitos.
They have no sense of personal self, no real boundaries, & are open to psychic disturbance. This is a behavioral disorder.