Pedophilia is pedophilia. It is not a sexual orientation.
Is being gay that rigorous to be on top of everything including pedophilia? Does being gay give people that much power to over shadow them being a pedophile?
Not all gays are pedophiles but a majority of pedophiles happen to be gay too. How that is possible?
A child molester is a child molester and should be treated like a child molester and prosecuted like a child molester. Being a heterosexual or a gay should have no impact on how pedophiles should be treated but that is not what we are facing this week.
Kevin spacey has literally confessed to have molested a 14 years old teen by calling it a drunken behavior and escaping the case by blaming his memory. Are the numbers too high to remember? If it was just ONE case, was it possible to be forgotten?
But the focus of the story is not even there. The plot is; he admits some kind of molestation to the actor Anthony Rapp, he apologizes for his drunken behavior, but he proudly announces his coming out as a gay man. Just like all of the news was about the universal puzzle of Spacey being a gay or heterosexual. The days after the big news, there is no name of the victim, no condemnation or disavow the horrific act of child molestation but the celebration and congratulations to Kevin Spacey for having the COURAGE to come out as a gay man. Is being gay so prestigious that makes molesting a child as a nonsense claim?
Pedophilia is pedophilia. It’s not a sexual orientation. Gay men sleep with gay men. That’s kind of a choice. Pedophiles take children into their bed by force or trick and molest them. That’s not a choice but a crime. Although mainstream media is trying to legalize pedophilia and make it look like a sexual orientation, but it’s not. It was a crime for all times and it will be a crime as long as the world goes on. Our children have no “choice” in that one sided sick intercourse and this cannot be acceptable in any culture. 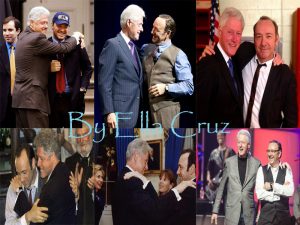 Kevin Spacey showed us the arrogance of the privileged Hollywood above the law monsters who have the confidence of the people backing them. Kevin Spacey revealed us the actual pedophile house of cards that no matter what the accusations are, they just play their cards fearing no prosecution.