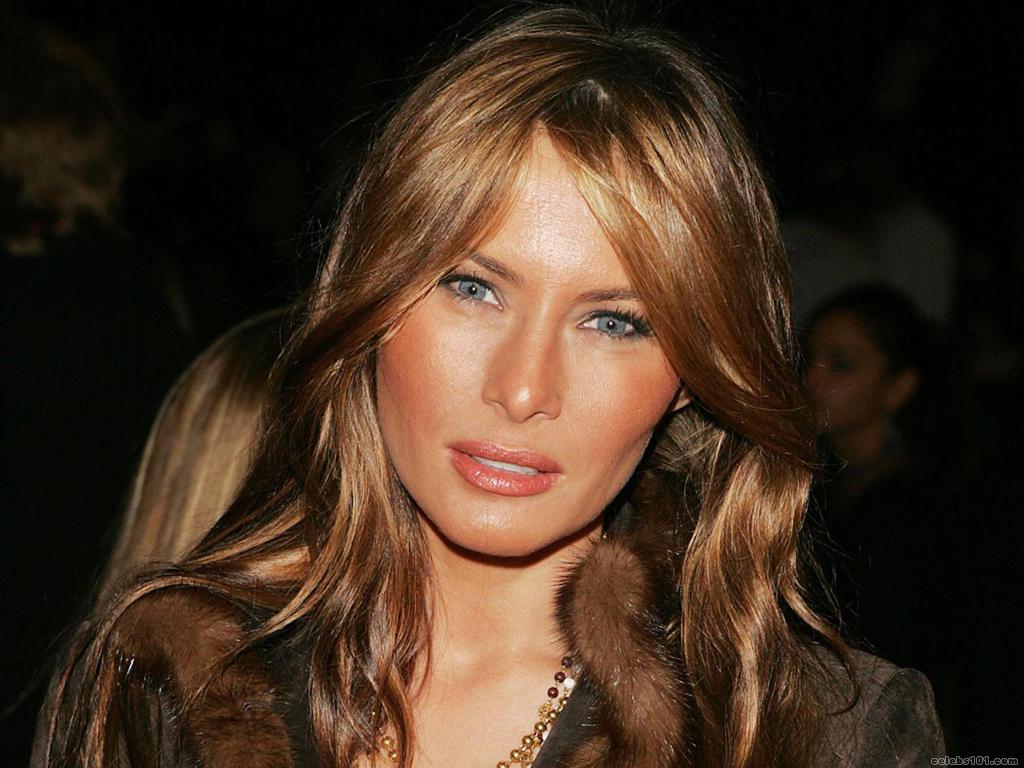 This is the pattern every single day but now that the First Lady of The United States goes under surgery it is pretty obvious.

Melania, the first lady of U.S always in worst pics and in a negative shade if they have to show her, otherwise she is always far away from the spotlight. They fear her beauty and popularity. Melania, the most elegant first lady of America after Jackeline Kennedy, normally should be on every stylish magazine. But she is actually a”hush” subject.
Instead Meghan Markle, the MSM 1st lady of U.S and Kate, the MSM holy goddess, always worshiped & admired. Shame!

As I wrote in RING OF THE CABAL:

“If you remember, before we start to dig into British Royals, we were talking about their progressive appearance on American mainstream media and how the MSM’s tone is like they are American and world’s royals. Tasteless articles like:
-“here is what royal family eats for Christmas dinner” (who cares?),
-“why it would breach royal protocol if Prince William was Harry’s best man” (Protocol? Of how to deceive people?)
-“8 rules that Meghan Markle needs to know before her first royal Christmas” (who these people think they are), “why Princess Charlotte…”
-“Kate stuns in ….”
-“Why the Queen….”,
or when we hear cheerful yells on TV daily shows saying
-“It’s official; Now we have an American Princess,”
I mean….what the hell are you doing American people?
You not only don’t care about the children, the crimes, and guilty verdicts but also promoting and enabling the injustice which is going on and avow to your young girls that the Status-Que of being a princess and living in a horrendous British castle is the highest achievement that an American girl can acquire? Giving these “lizards and reptiles” as Princess Diana called them, the attention and turn your backs on what America has stood for since its beginning? How can Americans and the world stand there and watch these mouthpieces insulting our intelligence while we hear what the Royals really do behind closed doors?”

“The progressive appearance of British Royals recently in American and world’s news outlet has just ONE reason. They are the “Keystone,” and they want you to know your future lords and start to fall into the habit to recognize them as superior, and to do that they use the romance of their younger generation. Never forget Queen Elizabeth was young too.”

The picture below is just TODAY’S news. This pattern is on mainstream media EVERY single day and it has been accelerated since 2016. The pattern presents itself very aggressively and tends to become more frequent. 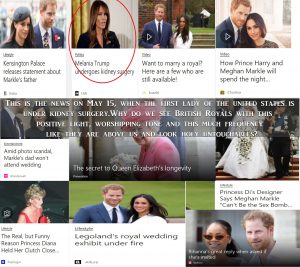 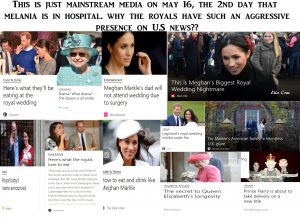 Why there is no news on mainstream media about Melania in the hospital? Why R reporters not in front of the hospital? Why do they fear so mucch Melania's popularity?#QAnon #WeThePeople #GreatAwakening #RedNation #TrumpsArmy #TrumpNation #SaveTheChildren #family #Deplorables pic.twitter.com/tfUr37bALF 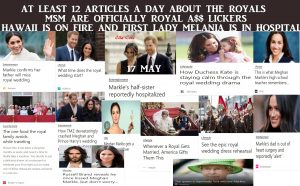