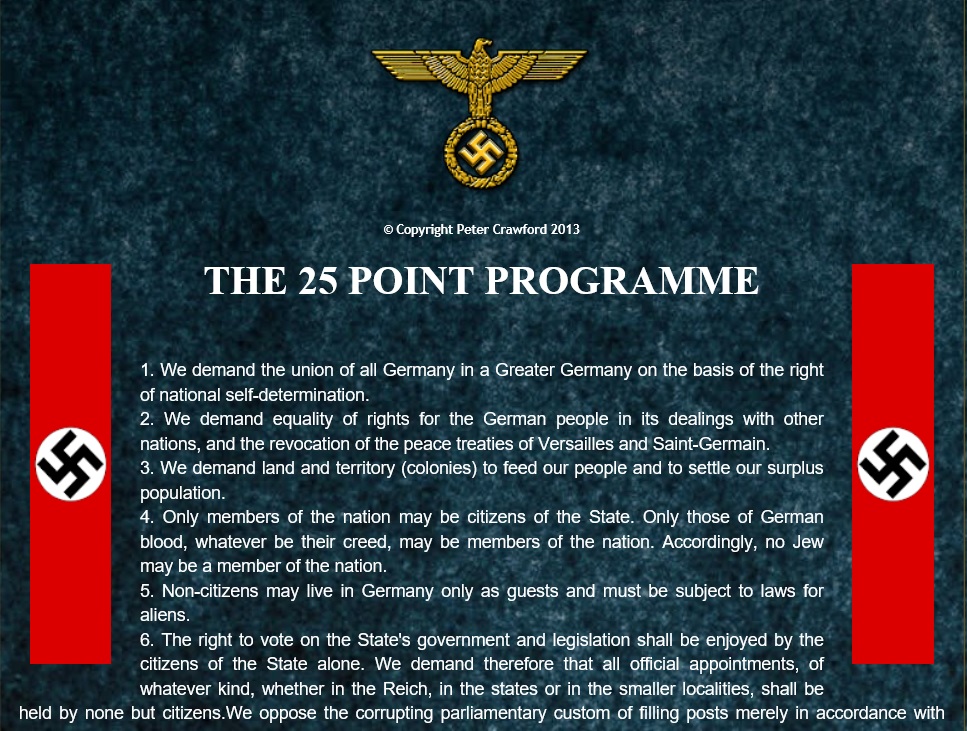 National Socialism by itself is a meaningless concept as either you are a socialist who can never be a nationalist OR you are a nationalist simply because you hate Socialism. There is no such thing as National Socialism and the third Riech purposefully invented an uncommon and misleading expression to embody his expansion of power and centralism and create a tangible and visual concept for his personal ambitions.

In THE 25 POINT PROGRAMME of the Reich, you see a few demands which can be nationalists’ demands too but as you go further, the system to implement these “demands” and the justifications are quite an authoritative centralization of power and the result was what we saw in Nazi Germany.

The NSDAP did propose a political program – in it very early days – known as the 25 point Programme.
The National Socialist Program originated at a DAP congress in Vienna, then was taken to Munich, by the civil engineer and theoretician Rudolf Jung, who, having explicitly supported Hitler, had been expelled from Czechoslovakia, because of his political agitation.
The politician Josef Pfitzner, a Sudetenland German Nazi, wrote that “the synthesis of the two, great dynamic powers of the century, of the national and social ideas, had been perfected in the German borderlands [i.e. the Sudetenland], which thus were far ahead of their motherland.”
Moreover, despite the political syncretism of National Socialism, the 25-point Program advocated democracy and greater popular rights, although only for “racially pure” Germans.

1. We demand the union of all Germany in a Greater Germany on the basis of the right of national self-determination.
2. We demand equality of rights for the German people in its dealings with other nations, and the revocation of the peace treaties of Versailles and Saint-Germain.
3. We demand land and territory (colonies) to feed our people and to settle our surplus population.
4. Only members of the nation may be citizens of the State. Only those of German blood, whatever be their creed, may be members of the nation. Accordingly, no Jew may be a member of the nation.
5. Non-citizens may live in Germany only as guests and must be subject to laws for aliens.
6. The right to vote on the State’s government and legislation shall be enjoyed by the citizens of the State alone. We demand therefore that all official appointments, of whatever kind, whether in the Reich, in the states or in the smaller localities, shall be held by none but citizens.We oppose the corrupting parliamentary custom of filling posts merely in accordance with party considerations, and without reference to character or abilities.
7. We demand that the State shall make it its primary duty to provide a livelihood for its citizens. If it should prove impossible to feed the entire population, foreign nationals (non-citizens) must be deported from the Reich.
8. All non-German immigration must be prevented. We demand that all non-Germans who entered Germany after 2 August 1914 shall be required to leave the Reich forthwith.
9. All citizens shall have equal rights and duties.
10. It must be the first duty of every citizen to perform physical or mental work. The activities of the individual must not clash with the general interest, but must proceed within the framework of the community and be for the general good.We demand therefore:
11. The abolition of incomes unearned by work. The breaking of the slavery of interest
12. In view of the enormous sacrifices of life and property demanded of a nation by any war, personal enrichment from war must be regarded as a crime against the nation. We demand therefore the ruthless confiscation of all war profits.
13. We demand the nationalization of all businesses which have been formed into corporations (trusts).
14. We demand profit-sharing in large industrial enterprises.
15. We demand the extensive development of insurance for old age.
16. We demand the creation and maintenance of a healthy middle class, the immediate communalizing of big department stores, and their lease at a cheap rate to small traders, and that the utmost consideration shall be shown to all small traders in the placing of State and municiple orders.
17. We demand a land reform suitable to our national requirements, the passing of a law for the expropriation of land for communal purposes without compensation; the abolition of ground rent, and the prohibition of all speculation in land.
18. We demand the ruthless prosecution of those whose activities are injurious to the common interest. Common criminals, usurers, profiteers, etc., must be punished with death, whatever their creed or race.
19. We demand that Roman Law, which serves a materialistic world order, be replaced by a German common law.
20. The State must consider a thorough reconstruction of our national system of education (with the aim of opening up to every able and hard-working German the possibility of higher education and of thus obtaining advancement). The curricula of all educational establishments must be brought into line with the requirements of practical life. The aim of the school must be to give the pupil, beginning with the first sign of intelligence, a grasp of the nation of the State (through the study of civic affairs). We demand the education of gifted children of poor parents, whatever their class or occupation, at the expense of the State.
21. The State must ensure that the nation’s health standards are raised by protecting mothers and infants, by prohibiting child labor, by promoting physical strength through legislation providing for compulsory gymnastics and sports, and by the extensive support of clubs engaged in the physical training of youth.
22. We demand the abolition of the mercenary army and the foundation of a people’s army.
23. We demand legal warfare on deliberate political mendacity and its dissemination in the press. To facilitate the creation of a German national press we demand:(a) that all editors of, and contributors to newspapers appearing in the German language must be members of the nation; (b) that no non-German newspapers may appear without the express permission of the State. They must not be printed in the German language; (c) that non-Germans shall be prohibited by law from participating financially in or influencing German newspapers, and that the penalty for contravening such a law shall be the suppression of any such newspaper, and the immediate deportation of the non-Germans involved. The publishing of papers which are not conducive to the national welfare must be forbidden. We demand the legal prosecution of all those tendencies in art and literature which corrupt our national life, and the suppression of cultural events which violate this demand.
24. We demand freedom for all religious denominations in the State, provided they do not threaten its existence not offend the moral feelings of the German race.
The Party, as such, stands for positive Christianity, but does not commit itself to any particular denomination. It combats the Jewish-materialistic spirit within and without us, and is convinced that our nation can achieve permanent health only from within on the basis of the principle: The common interest before self-interest. 25. To put the whole of this programme into effect, we demand the creation of a strong central state power for the Reich; the unconditional authority of the political central Parliament over the entire Reich and its organizations; and the formation of Corporations based on estate and occupation for the purpose of carrying out the general legislation passed by the Reich in the various German states.

Now this is all very well – socialism and nationalism – but is it National Socialism as we know it ?
There is undoubtedly something missing – in fact almost everything is missing – because National Socialism is not a political and economic ideology, but rather a gnostic-religious philosophy – a quasi-religion – a separate understanding of the cosmos – which, while looking to the future, has its roots in the distant, ancient past.

The question has been raised by numerous commentators – ‘is National Socialism a political ideology – or a ‘cult, masquerading as an ideology ?’

This study repeatedly uses the term ‘occult’ – (as in ‘Occult History of the Third Reich’) – a term derived from the Latin word ‘occultus‘, which can be translated as “clandestine, hidden, secret”, and is generally considered to be “knowledge of the hidden.”

The word ‘cult’, however, usually refers to a social group defined by its religious, spiritual, or philosophical beliefs, or its common interest in a particular personality, object or goal.
The term itself is controversial and it has divergent definitions, in both popular culture and academia, and it also has been an ongoing source of contention among scholars across several fields of study.
In the sociological classifications of religious movements, a cult is a social group with socially deviant or novel beliefs and practices.
The word “cult” has always been controversial because it is (in a pejorative sense) considered a ‘subjective term’, used as an ad hominem attack against groups with differing doctrines or practices.
Groups said to be cults range in size from local groups with a few members to international organizations with millions.
The term ‘cult’ itself derives from the Latin ‘cultus’, meaning worship.

To read the rest of the article by Peter Crawford click here.