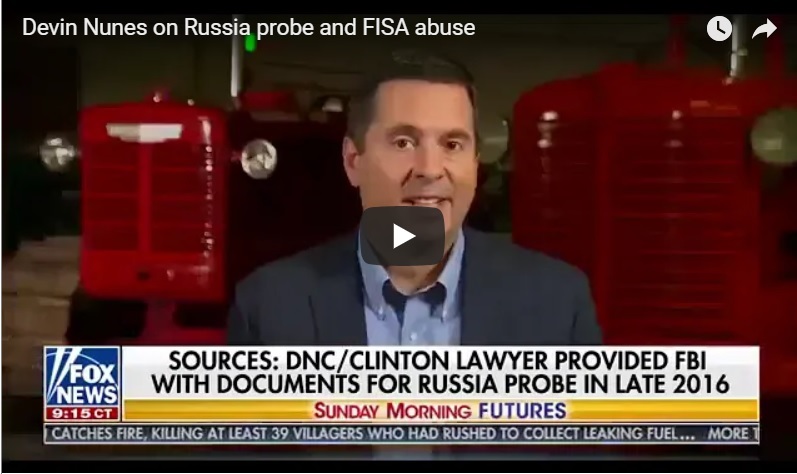 Did you fully understand the severity of the situation?? Mueller was put into place, carefully selected by James Baker & McCabe. DOJ lawyer Michael Sussmann worked with Perkins Coie on behalf of the DNC & leaked info to former FBI James Baker. That means DOJ+FBI Treason-corruption.

Appointing Mueller had two results: 1- An investigation could shield any corrupt FBI/DOJ official who would find himself under congressional investigation. Questioned by IG Horowitz or Congress, they are unable to answer those questions due to the ongoing special counsel investigation.

2-The investigation keeps any inquiry focused away from the corrupt DOJ and FBI activity that took place in 2016, 2016, 2017. Keep the media narrative looking somewhere, anywhere, other than directly at the epicenter of the issues.

That means the most corrupt individuals: Mueller, Rosenstein, Mccabe and the rest, can’t be investigated or prosecuted as they are in charge of an investigation. Therefore, Rosenstein has been an intentional effort to keep as much of the evidence hidden from public review.

Read the fantastic and extensive article on Conservativetreehouse.com here.

in part of the article by Sundance we read:

House Intelligence Committee Chairman Devin Nunes appears with Maria Bartiromo to discuss the ongoing FISA abuse investigation; the use of Michael Sussmann to act as a go-between for the DNC and FBI; the status of Deputy AG Rod Rosenstein, and his upcoming (10/11) testimony; current visible activity within the DOJ that points to their ongoing corruption; and how all of that relates to the Robert Mueller investigation.

This is a very important interview segment because it dovetails with the much larger issue CTH outlined about: “How Deep Is This Swamp“?  Believe me, you’re going to want to watch this several times to absorb the bigger-big picture that Nunes is careful to explain.

Working backwards from the interview content is perhaps the best way to discuss.  Nunes cannot say it out loud, but when he outlines what the Mueller investigation *is not* doing, he is highlighting the purpose of Special Counsel placement.

Robert Mueller (the entire team) was put into place, carefully selected by James Baker and Andrew McCabe, specifically to cover for the DOJ and FBI activity that preceded the firing of James Comey.   Mueller’s role has two essential aspects:

♦(1) Create an investigation – Just by creating the investigation it is then used as a shield by any corrupt FBI/DOJ official who would find himself/herself under downstream congressional investigation.  Former officials being deposed/questioned by IG Horowitz or Congress could then say they are unable to answer those questions due to the ongoing special counsel investigation.  In this way Mueller provides cover.

♦(2)  Use the investigation to keep any and all inquiry focused away from the corrupt DOJ and FBI activity that took place in 2016, 2016, 2017.  Keep the media narrative looking somewhere, anywhere, other than directly at the epicenter of the issues.

In both of these objectives the Mueller special counsel has been stunningly effective.

That leads to the second aspect of Nunes discussion, the role of Deputy AG Rod Rosenstein.  All of the visible activity being conducted by Rosenstein has been an intentional effort to keep as much of the evidence hidden from public review.  When Nunes points out that Rosenstein’s motives are to keep the documentary evidence classified he is speaking directly to this aspect.

But the current corrupt DOJ activity is not isolated to FISA abuse and documents the usurping officials want to keep hidden.  The corrupt activity also flows outward and can be found in the DOJ behavior surrounding James Wolfe; the busted Senate Intelligence Security Official who was caught leaking the classified FISA application to the media.

The reason Wolfe was not indicted for the more serious charges of leaking classified intelligence is because the *CURRENT* DOJ needs to hide what was taking place.  Wolfe is simply a benefactor of current DOJ officials who need to hide their fingerprints and activity in 2016 and 2017.

Those currently corrupt DOJ and FBI officials are not protecting Wolfe as much as they are protecting themselves.  This includes Rosenstein, FBI Director Christopher Wray, Deputy FBI Director David Bowditch and current FBI general counsel Dana Boente; as well as all the second level and third level carry-over career officials.  The failure to accept this currently corrupt DOJ and FBI is where most of the “Stealth Jeff” and “Q” believers are entirely wrong.

The efforts of Rosenstein, Wray, Bowditch, Boente et al, to cover-up the institutional corruption extends far beyond their blocking activity of the declassification requests; and shows up in the lack of substance behind the Wolfe indictment and the ability of the external Lawfare group, former officials, to influence current activity.

Part of that current influence is keeping the most severe elements of investigative sunlight away from review.  These officials have done this in many visible ways.  Three of them are inarguable:

(1) By redacting innocuous, albeit highly damaging information, within the Lisa Page and Peter Strzok text messages and emails.  Officials within the agencies are hiding information and even eliminating the most damaging material.”

To read the rest of the article click here.