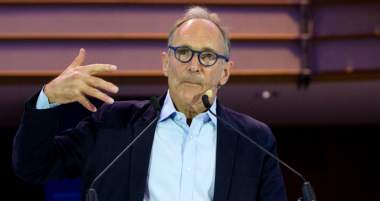 The inventor of the World Wide Web, Sir Tim Berners-Lee (shown), believes that “the web has evolved into an engine of inequity and division; swayed by powerful forces who use it for their own agendas.” To correct that and “restore the power and agency of individuals on the web,” Berners-Lee is preparing to re-invent the web.

Due to the growing prevalence of the twin evils of data-mining and data-manipulation, the web — created to be a free and open platform — has instead become a place where users find themselves robbed of both their privacy and easy access to reliable information on which they could base sound decisions. Take as just one example, the Cambridge Analytica breach of Facebook last year. By the time the dust settled and the smoke cleared, at least 50 million (and possibly as many as 87 million) users had their data harvested and used to manipulate their (and their friends’) votes in the 2016 presidential election.

And while that example points to Facebook, the reality is that the social media giant is far from alone. Other tech behemoths, including Google, Microsoft, and others, are also guilty of practicing “surveillance as a feature,” wherein users are tricked into handing over the digital keys to their lives in exchange for “benefits” such as easy syncing of calendars and address books. As a matter of course, these companies then misuse that data for their own benefit. With Google, Facebook, and Twitter routinely filtering search results and users’ timelines in favor of political candidates and policies favored by the decision makers at those companies, it is no wonder that the inventor of the web said that he has reached a “tipping point” where he sees that “people are reading stuff which is complete garbage and they’re believing it, and they vote.”

When asked specifically about that statement, Berners-Lee said, “Science tells us what to believe are facts,” adding, “And democracy relies on facts. So democracy relies on science.” He went on to say, “People don’t follow links from one website to another, they sit on one website, and what they see is determined by the people who code that social network.”

While this writer may take exception with Berners-Lee’s use of the word “democracy” (the United States is a republic, a government of law wherein the rights of the individual is protected regardless of the whims of the majority), his point is valid. As Mark Twain is quoted as saying — though, ironically, he may never have said it — “It ain’t what you don’t know that gets you into trouble. It’s what you know for sure that just ain’t so.” When people glean a disproportionate amount of what they think they know from a small handful of platforms — and those platforms are operated by people who are only too glad to manipulate the flow of information while harvesting users’ data to analyze it and use it to further manipulate those users’ thought processes — the very foundation on which the value of voting rests is at stake.

To rectify the web’s transmogrification “into an engine of inequity and division; swayed by powerful forces who use it for their own agendas,” Berners-Lee is preparing to launch “Web 3.0” and has written a Contract for the Web to express the digital rights of users.

His new “Contract for the Web” begins by laying out what he sees as “Core Principles” stating:

The web was designed to bring people together and make knowledge freely available. Everyone has a role to play to ensure the web serves humanity. By committing to the following principles, governments, companies and citizens around the world can help protect the open web as a public good and a basic right for everyone.

The Contract addresses the responsibilities of governments, companies, and citizens and states that those governments which sign onto the Contract will:

Ensure everyone can connect to the internet so that anyone, no matter who they are or where they live, can participate actively online.

Keep all of the internet available, all of the time so that no one is denied their right to full internet access.

Respect people’s fundamental right to privacy so everyone can use the internet freely, safely and without fear.

Signatory companies are obligated to:

Respect consumers’ privacy and personal data so people are in control of their lives online.

Develop technologies that support the best in humanity and challenge the worst so the web really is a public good that puts people first.

Citizens — who have the most to gain from implementation of the Contract — would agree to:

Be creators and collaborators on the web so the web has rich and relevant content for everyone.

Build strong communities that respect civil discourse and human dignity so that everyone feels safe and welcome online.

Fight for the web so the web remains open and a global public resource for people everywhere, now and in the future.

Berners-Lee — seeming to recognize that a “Contract” is not enough — has already begun launching what he says some are describing as “Web 3.0.” Web 1.0 was the original World Wide Web, which was designed to open the Internet up to citizens as a free and open platform of communication, commerce, and exchange. In the early days of Web 1.0. it was more than a little like a digital Wild West — an Electronic Frontier (from which the Electronic Frontier Foundation (dedicated to preserving digital liberty) drew its name. Web 2.0 is the current model, which has been created by the likes of Facebook, Google, Microsoft, and others hijacking Web 1.0 and mutating it into a place where corporations have an easy hunting ground in which to harvest and manipulate users’ data. Web 3.0 would be a deliberate attempt to protect web users and their rights.

To accomplish that, Berners-Lee has launched the Solid project at MIT. The name “Solid” is derived from “social linked data.” The Solid website explains:

The site also describes Solid as “a proposed set of conventions and tools for building decentralized social applications based on Linked Data principles” and says that Solid offers:

Users should have the freedom to choose where their data resides and who is allowed to access it. By decoupling content from the application itself, users are now able to do so.

Because applications are decoupled from the data they produce, users will be able to avoid vendor lock-in, seamlessly switching between apps and personal data storage servers, without losing any data or social connections.

Developers will be able to easily innovate by creating new apps or improving current apps, all while reusing existing data that was created by other apps.

And because Solid is an open-source platform (meaning, among other things, that the source code if freely available), believing these claims is not merely a matter of trust; one can both trust and verify. One company involved in the development of Solid is inrupt. The company’s websiteexplains the value of Solid, stating:

It’s time to reset the balance of power on the web and reignite its true potential.

When Sir Tim Berners-Lee invented the web, it was intended for everyone. The excitement and creativity of its early days were driven from the notion that we can all participate — and the impact was world-changing.

But the web has shifted from its original promise — and it’s time to make a change.

We can still unlock the true promise of the web by decentralizing the power that’s currently centralized in the hands of a few. How? By using the power of Solid.

Solid is the technically potent open-source platform built to decentralize the web. Inrupt is the company that’s helping to fuel Solid’s success.

While this is far from the first time someone has tried to re-decentralize the web, Berners-Lee believes the time has come, saying he predicts a “big backlash against the mistreatment of personal data” and a “realisation that people should control their data.” He said this leads him to predict “a revolution” which is “starting right now.”