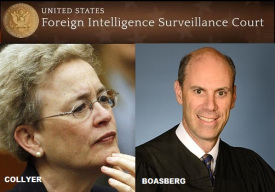 Why We Need Immediate Changes to FISA Laws – A Video Encapsulation….

This is a fantastic and well-timed video that cuts to the heart of the matter.  John Spiropoulos has produced an exceptional video outlining the structural issues within the FISA process.  This video succinctly outlines the modern history of FISA abuse issues and highlights why we must use this critical moment to reform the FISA process.  WATCH:

Share this video with those who need a fast encapsulation of the FISA issues at hand.

According to Senator Rand Paul, President Trump is committed to seeing that FISA is not reauthorized without “significant” reform.  Senator Paul has proposed to significantly change the FISA process by forcing the DOJ, FBI and Intelligence Community to apply for search and surveillance warrants to Title-3 courts in order to access any NSA database containing private information of American citizens.

Current FISA authority expires on March 15th.  The Senate is scheduled to go back into recess March 13, 2020.  Additionally, the DOJ/FBI response to the FISA court order (due February 5th) has still not been made public.  If congress is going to reauthorize the controversial FISA provisions, they now have nine days.

For the past several years no corrective action taken by the intelligence community has improved the abuses outlined by the FISA court.

Also keep in mind the deadline for the DOJ to respond to the FISA court about the abusive intelligence practices identified in the Horowitz report was February 5th, more than four weeks ago. The responses from the DOJ and FBI have not been made public.

It appears the DOJ is trying to get the FISA reauthorization passed before the FISC declassifies the corrective action outlined from the prior court order. This response would also include information about the “sequestering” of evidence gathered as a result of the now admitted fraudulent and misrepresented information within the FISA applications.

The FISA “business records provision”, the “roving wiretap” provision, the “lone wolf” provision, and the more controversial bulk metadata provisions [Call Detail Records (CDR)], again all parts of the Patriot Act, must not be reauthorized without a full public vetting of the abuses that have taken place for the past several years.

The position being put forth by Rand Paul is exactly correct.  Change the law so that FISA can only be used against foreign actors, and force the DOJ or intelligence apparatus to go to a normal Title-3 court for a search/surveillance warrant against any American.