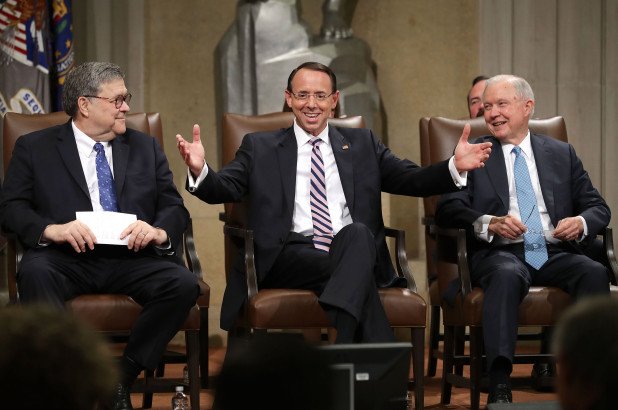 Abstract: “Bill Barr is essentially protecting Andrew McCabe, and as a consequence Rod Rosenstein, out of a similar necessity.  From AG Barr’s perspective, there’s no way the institutions of government could survive the potential evidence at a McCabe trial; and McCabe would call Rosenstein as a defense witness. “

“The seditious group filled the DOJ fire truck tanks with gasoline, and then they lit the House on fire.  General Flynn is trapped on the roof…. The neighborhood is shouting at fire Chief Barr “put out the fucking fire you idiots“, and wondering why everyone is just watching the House burn. Meanwhile, there’s several firefighters who know what’s in the tanks, and they are standing, smiling, hoses at the ready, cheering-on the angry shouts from the crowd…”

Before going into Sundance’s amazing analysis, I repeat again: I don’t trust AG Barr, I never did. I didn’t trust Sessions either but he was apparant. AG Barr came one way and will be gone in another way. Exonerating McCabe was the last thing I needed to know who is a deep state agent. The DOJ and the FBI are both corrupt and at war with us.

For the past week CTH has been outlining some lengthy research, highlighting key issues to help understand the background of what is evident.  If you’ve followed along, in this outline the individual pieces will all come together.  Bill Barr has a very big problem…

United States Attorney General Bill Barr was not around in 2017 or 2018 when the DOJ was faced with the issues resulting from an investigation of intelligence leaks and Senate Select Committee on Intelligence (SSCI) Security Director James Wolfe.

When the prosecution of SSCI Director James Wolfe was being considered, AG Jeff Sessions was recused; the Robert Mueller probe was ongoing; and as a consequence Deputy AG Rod Rosenstein and U.S. Attorney for DC Jessie Liu were decision-makers.

I’m not going to repeat all the issues, you can re-read them HERE; however, the baseline is that Wolfe could not be prosecuted without running the risk of collapsing key institutions of the U.S. government. The consequences of a Wolfe prosecution were beyond the capacity of Rod Rosenstein, or the DOJ to handle.  There would have been massive constitutional crises created and the literal definition of ‘sedition‘ was at the center of it.

Accepting the 2018 objectives from Rosenstein; and factually I doubt Jeff Sessions would have made a different decision even if he was not recused; when AG Barr takes the helm in February 2019 he is forced to carry-over those same objectives.

In essence, regardless of Bill Barr’s outlook or opinion of what took place, he had no alternative except to defend the previous decisions.  As a result Barr has no option except to protect Rod Rosenstein.

If former Deputy FBI Director Andrew McCabe was ever to be prosecuted the same issues that surfaced with James Wolfe would surface again.  The actions by DAG Rosenstein in 2017 merged with the objectives of Andrew McCabe at the same time. {SEE HERE}

It can be debated whether Rosenstein collaborated with McCabe purposefully, or whether he was blind to the prior year corrupt activity within the DOJ/FBI and fell into a trap.  It doesn’t really matter what Rosenstein’s 2017 motives were; the facts show Rosensteins’ actions facilitated the goals of McCabe and the corrupt actors within the DOJ/FBI.

The DOJ had to throw a bag over Pientka or eliminate him.  Thankfully, and not surprisingly, they chose the former and now he’s under protection.

DAG Rosenstein could not prosecute James Wolfe without exposing ‘seditious‘ activity within the U.S. government itself.  Not pretend sedition or theoretical sedition, but an actual pre-planned subversive operation with forethought and malice.

It’s the underlying activity that cannot be allowed to surface; the institutions of government are not strong enough, nor are they set-up to handle, prosecutions that overlap all three branches of government. [ex. read former questions]

However, that said, now AG Bill Barr is facing a downstream and parallel issue within the prosecution of Lt. Gen. Michael Flynn.  How can Michael Flynn be sentenced for lying to the FBI when the DOJ is necessarily refusing to prosecute Andrew McCabe (at least what has been made public) for the exact same behavior?

Against this dynamic, the DOJ has two options: (Option A) go even harder at General Flynn using additional charges that are not as comparable to McCabe.  (Option B) find a way to drop the prosecution.

This dynamic is why the McCabe prosecution was not resolved in 2018.  This issue explains why there has been such a delay in the McCabe issue(s) since Bill Barr came into the picture in February 2019.

If Flynn just took the plea, everything would have been easier for the DOJ.  There would have been nothing to compare between the two, and time would have created distance to avoid any real comparison.  But Flynn reversed position and backed away from the plea.

So what do we see?

We see McCabe given an institutionally necessary free pass, and now Barr bringing in another federal prosecutor from St. Louis to reevaluate Flynn’s position.  The two options are again being debated: Crush Flynn on other matters; or drop it.

Take the totality of all these issues together.  Think about them for a while…

…Now do we see why AG Bill Barr needs President Trump to shut up?

Rod Rosenstein essentially protected James Wolfe because he saw no way the institutions of the U.S. government could survive the potential evidence in a trial.  Setting aside opinion on Rosenstein’s enabling of the sedition; enabling underpinning seditious activity; the decision makes sense.  [Consequences too big to jail]

Bill Barr is essentially protecting Andrew McCabe, and as a consequence Rod Rosenstein, out of a similar necessity.  From AG Barr’s perspective, there’s no way the institutions of government could survive the potential evidence at a McCabe trial; and McCabe would call Rosenstein as a defense witness.   [Consequences too big to jail]

At the heart of the matter, in the real activity that took place, there was a multi-branch seditious effort to remove President Donald J Trump.  From the perspective of those charged with the actual administration of justice – there is no way to put this in front of the American public and have the institutions survive.  What we are witnessing is a dance between increasingly narrowing rails and the DOJ trying to find an exit.

All of this 2020 angst is a downstream consequence of the 2018 decision not to prosecute James Wolfe; and the specific reason why they made that decision.

Those who framed the sedition recognize Bill Barr’s outlook on institutional preservation is an opportunity to weaponize against him. That is why four prosecutors could so easily defy his authority and set Barr up with the Roger Stone sentencing recommendation.

The corrupt crew saw what the DOJ and FBI did when they had the opportunity to expose it all in 2018.  DAG Rosenstein was afraid.

The seditious group filled the DOJ fire truck tanks with gasoline, and then they lit the House on fire.  General Flynn is trapped on the roof…. The neighborhood is shouting at fire Chief Barr “put out the fucking fire you idiots“, and wondering why everyone is just watching the House burn. Meanwhile, there’s several firefighters who know what’s in the tanks, and they are standing, smiling, hoses at the ready, cheering-on the angry shouts from the crowd…

President Trump says: Point the compromised firehoses at the smiling firefighters while making them hold the Zippo’s… then watch what happens.

The only way I can see out of this mess; the one crack in the current lock box; is the FISA court order for the DOJ to present the identified downstream consequences from fraud upon the court.  The FISC might actually be the ladder truck here.  With the DOJ and FBI currently assembling the investigative consequences, ie. the sequestration material, Flynn’s current legal status might be identified as an outcropping of fraudulently obtained FISA warrants.