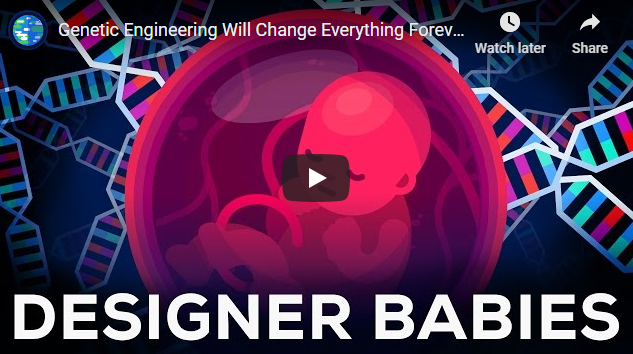 Trans-humanism is the idea of using fields of genetics, Nano-science, and technology to extract the stem cells, transporting mankind into the next step and creating legally justified homo-sapiens. Bring Eugenics, play with genes then call it genetics; a legal science. Now fashioning it, glorify it, decorate it and call it trans-humanism.You are now allowed to operate eugenics legally and scientifically.

(This is part of a bigger article Martial Law Jenga)

CRISPR is a gene editing tool emerged from a combination of Bioethics and genetics and accelerated rapidly. Gene editing tools were only invented a few years ago and took an unbelievable spike of its own. Today molecular laboratories offer a CRISPR modification kit, costing only $400, equipped with a click-edit system capable of changing your genes and not yet enough, passing the modification to your children and their children and if a wrong spot is altered, a wrong modification will pass to your generations. The DOD now has 40000 scientists working in military laboratories across 22 states to advance this technology.

No difference lies between gene-line editing aka CRISPR and what Hitler wanted to do. Modifying genes in the early stage of the human embryo, that gene will be genetically inherited to the next generation.

The DNA ancestry test was a scam to legitimize registering our signature DNA. What difference does it make who are our ancestors? Our DNA is the most private asset that we are in possess of. Don’t put it on public billboards!

(The first three CRISPR videos, I received from my friend Sentient⚡️Storm @TripMc3 who is a very good researcher on space-related issues and specifically about planet Mars)

What will happen when people with no moral ethics have access to this transgenic science?

Those who see us as a revolutionary process of an animalistic evolution, and as worthy as animals, what would they do with that science? Enhance humans? Producing humans, who function more than normal because of a chip in their brain? People who will occupy seats on every job because they function better? What decisions would those modified “humans” take?

It’s necessary to say that these laboratories are now worldwide and they operate secretly under the United Nations satanic organization hidden behind numerous tricky scientific “research” titles to avoid any suspicion.

The Academy of Medical Science in Great Britain, which is the equivalent for FDA in the US, has issued a 150 pages report which shows these laboratories exist in all across the world, and they have already created human cognitive in animals. The report is called ACHM AKA “Animals Containing Human Material,” and believe there are animals who have reached human cognitive ability.

If you are a believer you know why these forces tend to destroy the man, who is created as the image of God and if you are not, I hope you will be blessed.

In part of this report we read:

Evidence gathered to aid the working group included oral evidence sessions and correspondence with the working group, an open call for evidence and a programme of public dialogue with an associated evaluation.

In February 2016, the Home Office published new guidance on the use of human material in animals as a direct result of the recommendations of this report. The guidance provides much needed clarity on the regulation for research using animals containing human material. “
Umm… and animalists are just attacking meat-eaters to help to save animals from being eaten… Well being eaten is way better than being used, isn’t it?
WWW.ACMEDSCI.AC.UK
………………………….

The problem is human and the computer had a distance in their evolution process. Computer and technology designers always tried to reach the level of human consciousness and why they tried so hard? Because once the artificial intelligence didn’t reach the human intelligence, it will have a slower pace but when it reaches it, instead of surpassing it, it will elevate at the speed of light and nothing can stop it anymore. There will be only a technologic war after that point and as it is evident by all these documents, we have passed that level ages before. They just didn’t let us know it. In this video below, which opposite to the above CRISPR recent videos is very old, we clearly see that the technology of human modification and cloning not only have existed long before but even it’s products which are human clones have been living since 1938. So don’t imagine with the normal daily life level of imagination. Enhance your fantasy and think about many movies you have seen. Many of them were real.

As a conclusion to the above mentions part of the document, we just have to think about the eugenics. When you connect this document to what happened after WW2 with transferring Nazi eugenicists to America, what we are witnessing is just the continuation of their evil plan to dominate the world and the human modification comes directly out of their Auschwitz playbook. CRISPR, “Animals Containing Human Material,” Gene editing or whatever you want to nicely call it, it is EUGENICS, and we are dealing with the same old blueprint of Auschwitz. The entire DOD leaked document pictures a high-level technologic Auschwitz and the brainwashed mass is preparing itself for its mass genocide without even being aware of. A smart Auschwitz with the most advanced technology and it is not over-estimating the situation. It is there, right in your face.