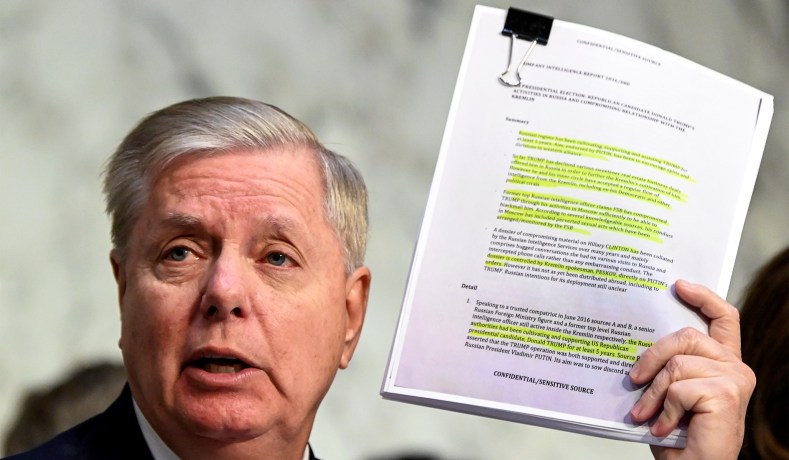 In response to requests from Senators Chuck Grassley (R., Iowa) and Ron Johnson (R., Wisc.), the Department of Justice on April 10 declassified four footnotes included in Inspector General Michael Horowitz’s report on the FBI’s Crossfire Hurricane investigation. As of Thursday — six days after the footnotes became public — The New York Times and CBS News are the only mainstream outlets to cover the development. A host of other news outlets that closely followed the “Russiagate” story — and reported constantly on information related to Steele’s findings — have thus far ignored the new information.

One of the newly declassified footnotes, footnote 350, states that the FBI received reports in 2017 “indicating the potential for Russian disinformation influencing Steele’s election reporting.”

“It’s ironic that the Russian collusion narrative was fatally flawed because of Russian disinformation,” Grassley and Johnson said in a statement following the release. “These footnotes confirm that there was a direct Russian disinformation campaign in 2016, and there were ties between Russian intelligence and a presidential campaign – the Clinton campaign, not Trump’s.”

A further release on Wednesday detailed how Russian Intelligence knew of Steele’s efforts as early as July 2016, and that a “sub-subsource” for Steele’s primary contact was associated with “an individual in the Russian Presidential Administration in June/July 2016” and voiced “strong support for Candidate Clinton in the 2016 U.S. elections.”

Buzzfeed — which published the entire dossier composed by former British spy Christopher Steele in January 2017 — CNN, The Washington Post, Politico, and other outlets still have yet to cover the developments, despite widely circulating Steele’s claims following the release of his dossier, which played a “central and essential” role in obtaining FISA warrants against the 2016 Trump campaign.

In February 2017, CNN cited anonymous officials who had corroborated some of Steele’s claims for the first time, giving them “greater confidence” about the dossier’s credibility, and whose television anchors have insisted multiple times that “much of the dossier has been corroborated.”

In 2018, The Washington Post published an intricate timeline of Steele’s 17 reports to the FBI, which were compiled into the dossier and reinforced the U.S. intelligence claim that “the Russians engaged in an elaborate operation to swing the election to Trump.” The report, like others published in major newspapers and digital news outlets, made no mention of any potential Russian disinformation.

Politico reported on a 2017 London trip made by two Republican House Intelligence Committee staffers, who were reportedly trying to “track down” Steele, and suggested that the trip “underscores the importance of the 35-page dossier Christopher Steele wrote last year to congressional probes into possible collusion between Moscow and the 2016 Trump campaign.” Politico also reported on Horowitz’s 2019 interview with Steele as part of the Crossfire Hurricane probe, and cited sources who said the IG found Steele’s testimony “credible and even surprising.”