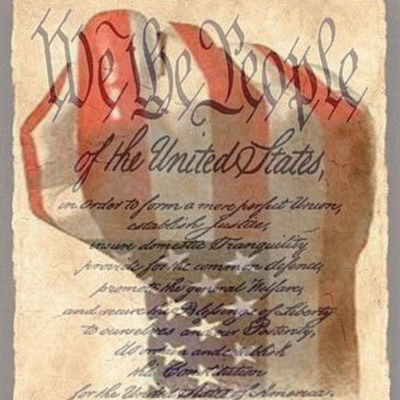 Nearly 244 years ago, our forefathers identified the “self-evident” truth of unalienable rights we are endowed with by God, foremost among them life, liberty, and property. They recognized that to secure these rights, governments are created by the consent of the people and that any government that refuses to recognize these rights is illegitimate. I never thought I’d live to see a time like this, but those rights are being called into question by state governors and county executives who are trampling them indefinitely with impunity. Clearly, there is a need to reaffirm the original Declaration of Independence.

The Declaration warns us not to revolt against a government “long established” “for light and transient causes.” But what we are seeing today is neither light nor transient, but rather stemming from “a long train of abuses and usurpations” for which “it is their right, it is their duty, to throw off such Government, and to provide new Guards for their future security.” As Thomas Jefferson wrote in 1774, “Single acts of tyranny may be ascribed to the accidental opinion of a day; but a series of oppressions, begun at a distinguished period, and pursued unalterably through every change of ministers, too plainly prove a deliberate, systematical plan of reducing us to slavery.”

The hypocritical consolidation of poisonous policies that our overlords have employed without the consent of the governed are too numerous and deliberate to be chalked up to simple disagreements over the science of the virus and the strategy of quarantine. Rather, they demonstrate an insidiously deliberate attempt to use the virus to breach the safeguards of the Constitution and to remake America into the worst mix of tyranny over peaceful citizens and anarchy for dangerous criminals.

“Such has been the patient sufferance” of we the people for six weeks, and we have borne these injustices without asking questions. Yet now, “the history of the present” political leaders “is a history of repeated injuries and usurpations, all having in direct object the establishment of an absolute Tyranny over” us.

“To prove this, let Facts be submitted to a candid world.”

Taken in totality, these actions are designed to ensure that Americans can no longer live in freedom and dignity without being vassals to government, while being forced to confront the anarchy of criminals and illegal aliens roaming their streets.

“In every stage of these Oppressions We have Petitioned for Redress in the most humble terms: Our repeated Petitions have been answered only by repeated injury” and even collaboration with digital platforms to stifle freedom of speech and assembly.

Now is about the time we would “mutually pledge to each other our Lives, our Fortunes and our sacred Honor” to fight for independence. However, in our system today, we need not risk our lives to beat this tyranny; we just need to rise up politically and refuse to give support to the usurpations and the usurpers. We need not risk bloodshed to preserve the sacrifice of the blood our forefathers shed to give us this opportunity to once again restore our republic peacefully.

Twitter
Author's note at the end o each post: -"Your biggest problems are so small for such a big God"-Ella Cruz" The Bible is the blueprint of Faith and the New Testament has given us God’s kind of faith and the authority to perform miracles through faith and through the name of Jesus. No matter what level of cancer we are; we can be healed by our faith and the word of God because Jesus did not care in what stage of death were the three people whom he raised from the dead. "The first time he invaded the realm of death was the daughter of Jairus, an official in Jerusalem. She was “just” dead. The second time the son of a widow in Nain was “one day” dead, and the third time Lazarus, brother of Mary and Martha in Bethany was “very” dead after three days, and he raised them “all.” It doesn’t matter how big is our problem, how long we have buried our problem and how hopeless we are because Jesus is the resurrection and the light."-Ella Cruz World's events are happening so fast. Putting Global Governance 2015, Agenda 2030, Agenda 2050, Antartica, Mars, CERN, G5, The United Nations, The European Union, the Club of Rome and the false prophets of the Vatican all together, we see that the satanic global government of these elites is imminent and it shall come to pass. The mark of the beast will be obligatory. You are either a Christian and believe this because this is what was predicted 2000 years ago through the Bible, or you are not a Christian but you read all these articles and connect the dots and notice that the satanic world government is their agenda and with President Trump we had 7-8 years that two of it have already passed and this was God's mercy on us. Their Global Governance 2025 matches the end of POTUS's second term. Their Green New Deal's 12 years matches the agenda 2030. The immigration and devouring America and Europe all go according to the blueprint of one world satanic government. We have a short time to prepare ourselves. But why we, born again Christians are happy and calm? Why we; who know that our day of prosecution, chasing Christians and forcing the mark of the beast will come, but we joyfully dedicate ourselves to the nation? What is the difference between us; evangelist Christians and normal Christians? 1- We believe Jesus Christ is the son of the Living God. 2- We believe the Bible is the word of God. 3-We believe God had so much loved us that he gave his only begotten son to die on the cross and through his blood, all our sins are washed away and forgiven. 4- We believe the price of our salvation, health, prosperity, happiness, and eternal life is paid by the blood of Jesus and we have all these gifts in us when we are born again. By his stripes, we are healed 2000 years ago. 5-We believe by accepting Jesus Christ as our savior, we open our hearts to the Holy Spirit and are baptized by him who will dwell in us and will reveal himself through dreams, visions, or may use speeches, videos, books to communicate with us. 6- We believe Jesus is the same yesterday, today and forever and we have the same DNA as Jesus Christ with the same miraculous abilities through faith. Just as the Apostles did the same signs and wonders as our Lord Jesus, through "faith," he; the Lord will accomplish the same miracles through us after we accept him as our savior. 7-We condemn the religion and all the fake prophets of the Vatican who deceived Christians for centuries and hid the true message of the Bible and the Good News from people to keep themselves in power. We welcome all denominations. 8- We believe that a born again Christian doesn't die and the moment his life on earth is ended, he is promoted to heaven immediately. There is no death for us, we just change the dimension and the other dimension is filled with immerse, joy, love, peace and glory of God. All people who had a personal visit, vision, dream or prophecy with Jesus or people who died for a short time, left their body and came back, know how does this experience feel. It is a divine relief and joy. Therefore, to answer the above question, we can happily die right now. In fact we would love to die yesterday but each one of us has a mission and purpose of life which the Holy Spirit has revealed to us after our born again experience and because of that mission, although we know our day of prosecution will come, but we are joyful and relaxed in the spirit because by preaching the Gospel and bringing people to Jesus we save them. To be born again, you just need to say: Lord Jesus, I accept you as my personal savior, Come to my heart, Forgive my sins, Wash me away, Make me a new person, And live inside of me. In the Name of Jesus from Nazareth, Amen. And that's it. You are saved. He will reveal himself to you and your life will dramatically change. Your marriage, your health (especially addiction), your finances and all areas of your life will experience this extraordinary change. And never look back. In Jesus name. Amen.