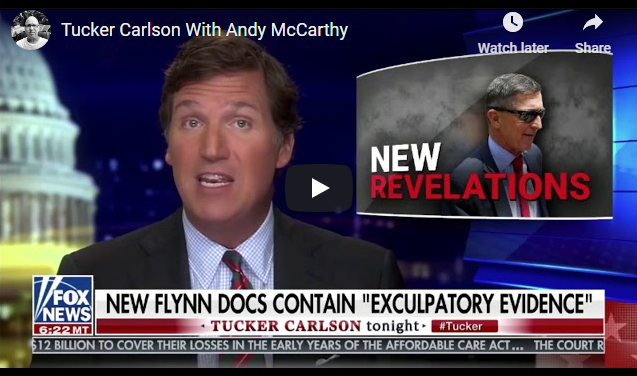 Fox News host Tucker Carlson provided some additional insight into the Flynn documents that were filed with the court last Friday noting the potential for the documents to be unsealed tomorrow.  According to an earlier report by Maria Bartiromo the documents relate to notes taken by former FBI legal counsel James Baker; and surround the events that encompassed the FBI interview of General Flynn in January 2017.  WATCH:

In a supplement to the defense motion to dismiss [pdf here] we discover some of the evidence of prosecutorial misconduct turned over by the DOJ to the Flynn defense. Specifically Lt. General Michael Flynn’s plea was based on: (1) a framing by the FBI; and (2) a threat against Michael Flynn Jr. if his father didn’t sign the plea.

If the reports are accurate it is very likely Judge Sullivan will allow the plea to be removed.  If the documents are as strong as outlined the entire case could be dismissed.

Because the exhibits had to be filed under seal, they are heavily redacted; however, Flynn’s defense counsel, Sidney Powell, has asked the court to release & unseal the full content of the exhibits so the world can see the coercion behind the corrupt plea agreement.

The Mueller prosecution team lead by Brandon Van Grack put the agreement and threat in writing, but they also made a deal with the former defense team to hide the terms in an effort to cover-up their misconduct. Coercion to force a plea is unethical and unlawful.

The full filing is below.

View this document on Scribd

According to the latest court schedule the deadlines are noted below. Michael Flynn’s new motion to dismiss is filing #181; the documents filed under sealed are item #182:

It is possible for the #182 documents to be unsealed prior to any motions on their content. According to Tucker Carlson these documents may be unsealed tomorrow.

According to Bartiromo James Baker’s notes are exculpatory in that they show the intent and purpose of the FBI interview was to frame Lt Gen. Flynn.

James Baker was removed from his position December 21, 2017, approximately three weeks after Flynn signed the plea agreement on November 30, 2017.

Baker’s removal from his position as FBI counsel was around the same time when SSCI Security Director James Wolfe (FISA leaker) was removed from his position at the Senate intelligence committee.  James Baker remained in his position until he resigned from the FBI on May 4, 2018, right in the middle of what we know were FBI cover-up operations.

One note of caution… There is another “James Baker” in the mix.

Col James Baker was the handler for CIA/FBI operative Stefan Halper.  Col James Baker is likely the source of the original Flynn-Kislyak leaked transcript to the Washington Post.

Therefore a possibility exists the “Baker” notes or emails might pertain to Col James Baker, and not FBI Counsel James Baker.  We’ll have to wait and see…