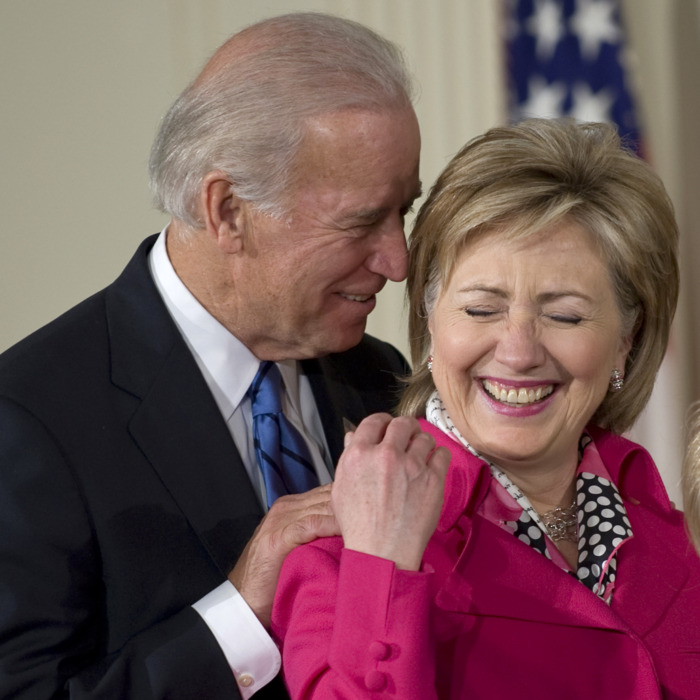 Mrs. Clinton’s endorsement is a reminder of Biden’s role as the candidate of continuity. Biden was Barack Obama’s vice president — basically a predictable old white familiar man who spent the Obama years in a dusty case labeled “Break Glass in Case of Emergency” — but he might have served as coRepumfortably in a Hillary Rodham Clinton administration. Or more comfortably, even: Barack Obama was, among other things, a mild and desultory critic of the 1990s settlement, the Bill Clinton–Newt Gingrich dyad that left the budget balanced and no one entirely satisfied.

One element of the 2008 Democratic primary was the muttered debate between those who saw the techno-utopianism of the Clinton era as the apex of practical American politics and proposed returning to it after the detour of the George W. Bush administration and those who saw in Obama a critique of the moderating New Democrat elements of the 1990s and desired a politics with more kick. Obama won that debate, and Biden came along for the ride to offer assurance to those who worried that the relatively unknown and freshly minted senator from Illinois might prove to be too radical.

Which is to say, in 2008 Mrs. Clinton was the continuity candidate in the Democratic primary and was rejected. In 2016, she was the continuity candidate in the general election and was rejected. In 2008, Democrats decided that they wanted something more than Bill Clintonism with ovaries. In 2016, Republican primary voters were offered several continuity candidates and a few ideological pugilists such as Senator Ted Cruz of Texas. They opted instead for radical discontinuity in the primary, choosing in Donald Trump a man with only the lightest affiliation with the Republican Party and no affiliation at all with the conservative movement that does the Republican Party’s thinking for it to modest effect and very little thanks. And the candidate of radical discontinuity prevailed in the general election.

Trump is a ubiquitous president but not a very energetic one: Out of the 700 or so key positions that require confirmation, nearly 200 remained vacant as of Monday morning — 146 positions had no nominee at all, 20 had a presumptive nominee not yet formally nominated, and 79 had nominees not yet confirmed in spite of the fact that the president’s party controls the Senate. The New York Times reports that his working day consists mainly of yelling at Fox News and then berating reporters at his regular coronavirus briefings, recently suspended. The president, enraged by the Times account, spent hours berating reporters by Twitter, where he was incessantly mocked for his spelling (“hambergers,” etc.) and his apparent misunderstanding of what a Nobel prize is and how “Nobel prize” is spelled.

But 93 percent of Republicans are satisfied with all that.

Most Republicans do not wish to return to the pre-Trump era. (We few remaining Eisenhower Republicans meet in a very small room and speak only in whispers.) Many Democrats evince a certain wistfulness for the Obama years, but that is more of a question of pecking order than anything to do with great Democratic policy victories, which were in fact few and far between during the Obama years: Even the landmark health-care law of 2009 began unraveling before it was enacted, and the system it tried to establish is today a wreck.

The conservative writer P. J. O’Rourke in 2016 offered a mock endorsement of Mrs. Clinton over Trump, saying: “She’s wrong about absolutely everything, but she’s wrong within normal parameters.” Don’t expect Biden to take that up as a slogan, but the former vice president implicitly is offering himself as a “return to normalcy” candidate on similar lines — a creep, a liar, a feckless time-serving hack of the lowest and meanest kind, but within normal parameters. That fits in with the basic bedrock dynamic of 2020: For Democrats, it’s anybody but Trump, and, for Republicans, it’s anybody but any Democrat. With a severe economic contraction on the way and an epidemic still raging, Trump’s argument for himself right now is, “Boy, things were great, right up until they weren’t!” Biden’s argument is that the worst day with Biden will be better than the best day with Trump.

The lines are drawn, but I wonder how many Americans really want a return to normalcy. They may not all want Trump, and they mostly may not want a confessing socialist such as Bernie Sanders, but from the Obama campaign to the Tea Party movement to Occupy Wall Street to the Trump campaign, there is plenty of evidence that 21st-century Americans are done with 20th-century politics and that they are inconsolably dissatisfied with what has been on offer from the two major parties. There is a demand, often dangerous and destructive, for radical change. Joe Biden is unlikely to slake that particular thirst.

Biden was first elected to the Senate the year I was born. He is a product not of the Clinton years but of the Nixon era. Even with an aging electorate (the median age of a voter in the 2016 election was 51), he is a dusty holdover of a time that is quickly receding into ancient history.

(These things move quickly: In 2011, the late Phyllis Schlafly graciously organized a little book event for me in Washington; watching Cate Blanchett play her in Mrs. America, among the hairdos and groovy interiors of the 1970s, it could not be more obvious that she was, after all, more a part of Jack Kennedy’s world than Mark Zuckerberg’s.)

Mrs. Clinton came to prominence when most Americans had never sent an email or heard of a web browser. Joe Biden was elected to the Senate in the first year that color televisions outsold black-and-white models. He comes from the other side of a great divide — and that is not only a matter of age. “Hillary Endorses Biden” is a headline that belongs on newsprint, like “Dewey Defeats Truman.”

The day after tomorrow, it will be, “Who?”