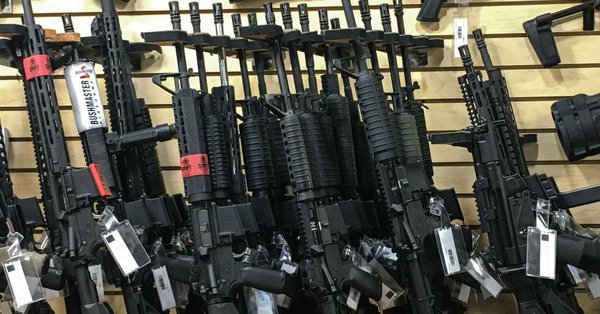 File photo of a gun shop in Roseburg, Oregon, USA, October 3, 2015 ©  REUTERS/Lucy Nicholson
While the US and Canada have much in common and even seem similar enough to an outsider, the ‘assault guns’ ban by PM Justin Trudeau marks the biggest distinction between them since the US declared independence in 1776.

An overseas visitor to both countries, such as I was in 1996 and many times since, could notice only minor visual differences between countries north and south of the 49th parallel, even though Canada uses the metric system and the US is one of the three remaining nations that do not. Beneath the superficial similarities, however, were fundamental differences going back to the British colonial era – from the concept of free speech to gun ownership.

Nothing has made those differences more clear than Trudeau’s announcement on Friday that he would outlaw 1,500 models of “military-grade assault weapons,” ranging from most rifles to rocket launchers and grenade throwers.

Never mind that nine of the 22 Nova Scotia victims died not of gunshots but of fires set to their homes – according to the Royal Canadian Mounted Police – or that the attacker impersonated a RCMP officer and used weapons illegally purchased in the US, or that his motive is still a mystery. Pay no attention to the fact that the ARI polled its members, of which 73 percent never owned a gun of any kind.

Trudeau did this because he used gun control to win re-election, because there’s a pandemic on so no one can stop him, and ultimately because, in Canada, he can.

Remember this from March 2018?

The quote is from a report by the government’s PR advisors … 11 days before the Liberal Party introduced Bill C-71.

In what surely has to be an ironic twist, the very Canadian PM literally recycled the rhetoric of US gun control advocates, from declaring that the weapons he was banning “were designed for one purpose and one purpose only: to kill the largest number of people in the shortest amount of time” to proclaiming that “Canadians deserve more than thoughts and prayers.”

Not surprisingly, this elicited a simping response from some Democrat US senators, who have long campaigned for similar bans south of the 49th parallel:

Canada’s government is set to announce a ban on assault-style weapons following a deadly shooting in Nova Scotia this month that killed 22 people.

America should have the moral courage to do the same. Weapons of war have no place in our society.https://thehill.com/policy/international/495434-canada-expected-to-announce-ban-on-assault-style-weapons …

Canada’s government is set to announce a ban on assault-style weapons following a deadly shooting in Nova Scotia this month that killed 22 people.

Leader of Canada’s opposition Conservative party, Andrew Scheer, also responded with US rhetoric, channeling Republican gun rights activists to proclaim that “Taking firearms away from law-abiding citizens does nothing to stop dangerous criminals who obtain their guns illegally.”

Yet the reason Trudeau can do this and Scheer can’t do much to stop him is that, beneath the thin veneer of surface similarities, Canada is not the United States of America. It has no Second Amendment to the Constitution, which guarantees private arms ownership. Neither does it have the First Amendment protecting near-absolute freedom of speech, of which Section 2 of the Canadian Charter of Rights and Freedoms is but a pale shadow.

The reason the US does is simple: back in 1776, armed colonists rose up against British troops sent to suppress their tax revolt, and won the ensuing war for independence. Private gun ownership was eventually written into the US Constitution in recognition of its essential role in this struggle. This explains how the US has three and a half times more guns per capita than Canada (120 to 34.7), according to official statistics from 2018.