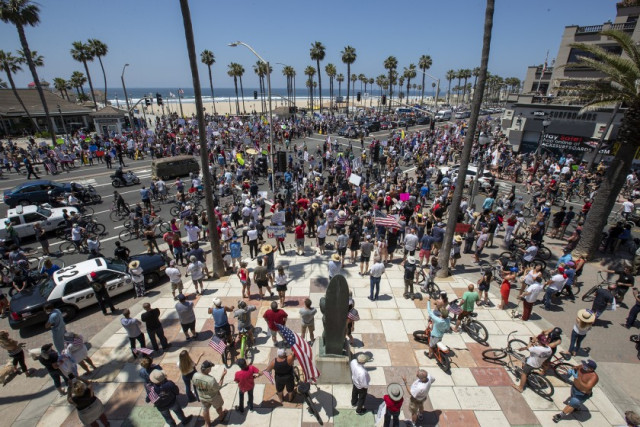 The Rebel Alliance is pushing back against the insufferable and silly rules of the little blue dictators hiding amid their governor mansions. Yes comrades, the pesky red subversives have taken to the street and realized ‘hey wait, there are more of us, than them‘…

“Have Tar, Need Feathers” – If the COVID Compliance Ministry tries to stop the uprisings, there could be trouble. As a result, some of the little Blue Dictators are retreating to their safe space:

CALIFORNIA – […] Reports on Friday estimated that there were more than 500 people who turned out in Huntington Beach to protest after Gov. Gavin Newsom (D) closed Orange County beaches in response to massive gatherings last weekend that went against stay-at-home orders.

Orange County had previously opened its beaches, and even after the large gatherings drew a rebuke from Newsom, the city of Newport had voted to keep them open.

Protesters on Friday were heard chanting “freedom” and “no more Newsom.” Some carried signs lamenting the need for a hair cut, while others held signs calling to reopen businesses so people could get back to work.

Police officers mounted on horses were present to control the crowd, with most, if not all protesters, reportedly violating social distancing guidelines of six feet of separation.

Newsom said on Friday the state is “days, not weeks” away from reopening, but cautioned people to stay home until the all-clear. (read more)

The gathering was substantially bigger than the protest on Main Street two weeks ago. Huntington Beach Police Department spokeswoman Angie Bennett said there were no arrests or injuries, and estimated the crowd at about 2,500 people.

Julian Brudnick, 28, of Yorba Linda waved a black flag that had a snake on it and read “Don’t Tread on Me.”

“I think it all comes down to the same thing, which is personal freedom and liberty, and not sacrificing freedom for security,” Brudnick said. “I haven’t seen this many people not wearing a mask. I go into Home Depot, you cough or sneeze and people give you a dirty look. What they can make us do to each other is unbelievable.”  (LA Times)

Hey, we’ve been piling into crowded supermarkets for seven weeks buying food, yet for some reason if we go into a store to buy sneakers it will create an explosion of the virus… According to the Blue logic, apparently the danger is the type of purchasing you make.