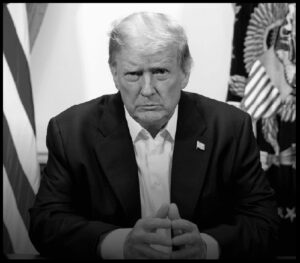 Interestingly Politico is picking up on a fear amid the GOPe (establishment) that President Trump will likely not only survive the second insufferable impeachment effort, but he is likely to exit stronger than ever…. and that means retaliation against the DeceptiCon class of republicans.

This is the blind spot of the UniParty, their inability to see that smart Americans have identified their motives and are prepared to destroy them.

This is the aspect CTH warned about the day after the November election.  The GOPe is so fraught with elitist perspectives, it continues to assemble as a hopeless echo-chamber,  and they never see what is happening at the grassroots level in Middle-America.

(Via Politico) […] Not even Trump’s closest allies can believe the turn in fortunes. “He’s Teflon, right. It’s been a month since the Capitol riot and I would say, for the most part, the GOP has coalesced back behind him,” said a former Trump campaign official.

[…] Already, Trump aides contend, the impeachment process has proved beneficial to the ex-president — exposing disloyalty within the party’s ranks and igniting grassroots backlash against Republicans who have attempted to nudge the GOP base away from Trump.

Nebraska Sen. Ben Sasse spent last week fending off constituent criticisms and censures from state party officials after he compared Trumpism to “a civic cancer for the nation.” And Trump’s allies believe the ex-president’s impending impeachment trial will further illuminate who the turncoats are.

“It’s going to help expose more bad apples that he can primary if any senators vote to convict,” added the former campaign official.

While ensconced at his Mar-a-Lago club in Palm Beach, Trump has remained in touch with political allies and advisers. But he has intentionally kept a low profile, something that will likely continue this week.

A[…] ides expect that to change once the trial wraps up though, with Trump gradually reemerging in public and turning his attention toward seeking revenge against Republicans who, he believes, crossed him after he left office.

The format in which he pursues retribution is less clear. (read more)

If President Trump takes the MAGA army into a new political party of his choosing, that new party is structurally set to lay waste to any candidate within both wings of the Democrat and Republican assembly. A Trump inspired political party can wipe out the illusion of the Democrat/Republican two-party system; specifically because much of the Trump movement consists of former democrats and brand new voters.

The MAGA coalition is the most diverse, widest and deepest part of the entire American electorate. President Trump’s army consists of every creed, color, race, gender, ethnicity and orientation. It is a truly color-blind coalition of middle America patriots and middle-class voters that cuts through the political special interest groups.

Additionally, no republican will ever hold office in the next decade without the blessing of President Trump; and President Trump could lay waste to the system if the GOP acquiesces to the transparent fraud that exists behind the Biden-Harris sham.

Beyond the politics… this 75 million vote assembly are consumers of products, goods and services generated by the same elites that hold them in contempt. If President Trump transfers and directs that energy, entities and even entire industries can be wiped out.

There is no precedent here. Seventy-five million angry Americans resolved to a common objective is not something to be trifled with.

We do not yet know where this current political crisis and ongoing battle is going to end; but we do know that 75,000,000 Americans will not accept the outcome of a political process transparently filled with fraud and manipulation. That makes President Trump a very dangerous entity to the DC system, regardless of whether they admit what surrounds them.

There is no reference point for 75 million Americans being disenfranchised by Wall Street, bribery, corporations, media and big tech. That 75 million person army is fuel for a stunning and cataclysmic shift in the American landscape.

This entry was posted in Big Government, Big Stupid Government, Conspiracy ?, Decepticons, Deep State, Donald
Author's note at the end of each post: -"Your biggest problem is so small for such a big God"-Ella Cruz" The Bible is the blueprint of Faith. The New Testament has given us God’s kind of faith and the authority to perform miracles through faith and the name of Jesus. No matter what level of cancer you are; you can be healed by your faith and the word of God. Jesus did not care in what stage of death were the three people whom he raised from the dead. He just called life on them. Let see how He did it. "The first time he invaded the realm of death it was for the daughter of Jairus; an official in Jerusalem. She was “just” dead. The second time it was the son of a widow in Nain who was “one day” dead, and the third time it was Lazarus; brother of Mary and Martha in Bethany who was “very” dead after three days. HE raised them “all.” It doesn’t matter how big is your problem, and how hopeless you are because Jesus is the resurrection and the light."-Ella Cruz World's events are happening so fast. Putting Global Governance 2015, Agenda 2030, Agenda 2050, Antarctica, Mars, CERN, G5, The United Nations, The European Union, the Club of Rome, and the false prophets of the Vatican all together, we see that the satanic global government is imminent and it shall come to pass. The mark of the beast will be obligatory. You are either a Christian and believe this because this is what was predicted 2000 years ago in the Bible, or you are not a Christian but you read all these articles, connect the dots and notice that the satanic world government is their agenda and with President Trump, we had 4 years and this was God's mercy on us. Their Global Governance 2025 is terribly close. Their Green New Deal's 12 years matches the agenda 2030. The immigration and devouring of America and Europe all go according to the blueprint of one world satanic government. We have a short time to prepare ourselves. Why are we, born-again Christians happy and calm? Why do we, who know that the day of our prosecution, being chased and forced to take the mark of the beast will come joyfully dedicate ourselves to the nation? 1- We believe Jesus Christ is the son of the Living God. 2- We believe the Bible is the word of God. 3-We believe God had so much loved us that HE sent his only begotten son to die on the cross for our sins. Through his blood, all our sins are washed away and forgiven. 4- We believe the price of our salvation, health, prosperity, happiness, and eternal life is paid by the blood of Jesus. We have all these gifts in us when we are born again by GRACE. By his stripes, we are healed 2000 years ago. 5-We believe by accepting Jesus Christ as our savior, we open our hearts to the Holy Spirit. We are baptized by the Holy Spirit who will dwell in us and will reveal Himself through dreams, visions, speeches, videos, books to communicate with us, immediately after our Salvation. 6- We believe Jesus is the same yesterday, today, and forever. We believe born-again believers receive the same DNA as Jesus Christ with the same miraculous abilities through faith. Just as the Apostles performed the same signs and wonders as our Lord Jesus did. They did it through "faith," and The Lord will accomplish the same miracles through us after we accept him as our savior. 7-We condemn the religion and many fake prophets of the Vatican (not all of our Catholic brothers and sisters) who deceived Christians for centuries and hid the true message of the Bible and the Good News from people to keep themselves in power. We welcome all denominations. 8- We believe that a born-again Christian never dies and the moment his life on earth is terminated, he is promoted to heaven. There is no death for us. We just transit to our new dimension which is filled with immerse, joy, love, peace, and glory of God. All people who have met Jesus in a visit, vision, dream, or have died for a short time, left their body and came back, know how does this experience feel. It is a divine relief and joy. Therefore, to answer the above question (why are we happy?), our answer is, we can happily die right now. In fact, we would love to die yesterday and go home but each one of us has a mission and purpose that the Holy Spirit has revealed to us after our born-again experience. For the sake of that mission, although we know our day of prosecution will come, we are joyful and relaxed in the spirit. Because we save people by preaching the Gospel and bringing them to Jesus. To be born again, you just need to say: Lord Jesus, I accept you as my personal savior, Come to my heart, Forgive my sins, Wash me away, Make me a new person, And live inside of me. In the Name of Jesus from Nazareth, Amen. And that's it. You are saved. He will reveal himself to you. Your life will dramatically change. Your marriage, your health (especially addiction), your finances, and all areas of your life will experience this extraordinary change. And never look back. In Jesus Almighty name. Amen.