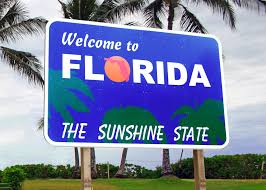 On a flight out of Orlando last month, I met a friendly Canadian family with three young children. We started chatting, and I asked what brought them all the way to Florida.

“We wanted to be able to take our kids to the park,” they told me. They aren’t alone in flocking to Florida to find freedom, as other states and countries continue to keep their citizens locked down.

Florida Is Open And People Are Voting With Their Feet

Florida Gov. Ron DeSantis started lifting lockdown restrictions back in May, allowing stores and restaurants to begin reopening in all but three counties in South Florida. The stay-at-home order also ended at the beginning of May. Unlike New York and California, Florida never tried to bar people from going to religious services.

At the end of September, DeSantis lifted all remaining statewide COVID-19 restrictions. Traveling back and forth from COVID-conscientious Northern Virginia to Florida, I could notice a difference. In Florida, kids were going to school, wedding parties were throwing receptions, young people were studying at coffee shops, and families were taking Christmas pictures downtown on the square.

By my observation, people wanted to keep living their lives, and they came to Florida to do it. The numbers suggest the same thing. Florida ranks third in the nation for one-way U-Haul rentals in 2020. (The state was behind only Tennessee and Texas, where lockdowns have also been comparatively less extreme.)

Despite the media’s rapturous coverage of New York Gov. Andrew Cuomo — who sent more than 9,000 potentially contagious patients into nursing homes and then covered it up — New York ranked 42nd on U-Haul one-ways. California, which was still shut down at the beginning of 2021, ranks dead last of all 50 states.

“When I go around Florida, I will see New York license plates here,” DeSantis told Tucker Carlson on Monday. “I doubt you see very many Florida license plates making their way to New York right now.”

Even the Democrat governor of Illinois sent his family to Florida for Thanksgiving, after Chicago Mayor Lori Lightfoot told residents to stay at home.

Home sales in Florida for 2020 have also outpaced sales in 2019 every month since June. Not only are people like my Canadian friends coming to visit Florida, many are settling there for good. Since April, Florida’s unemployment rate has remained better than New York’s and California’s.

Schools in Florida are open too, and have been since August. My brother goes to one of them. I’ve seen kids playing at recess.

Amid all this, Florida ranks 33rd in pediatric cases per capita, better than California, according to the American Academy of Pediatrics. The state of New York has not released its numbers on pediatric cases. Florida, the third-most-populous state, has a similar population to New York’s, at 21 million to 19 million. California’s population is 39 million.

Florida’s experience is consistent with epidemiological experience and research, as the infectious disease experts who authored the Great Barrington Declaration pointed out last October: “Basic epidemiological theory indicates that lockdowns do not reduce the total number of cases in the long run and have never in history led to the eradication of a disease.  At best, lockdowns delay the increase of cases for a finite period and at great cost. ”

This is also consistent with recent, peer-reviewed research done on COVID spread in different countries that finds lockdowns and their severity have no ultimate effect. Numerous other recent studies make this conclusion.

Florida was also below the national average rise in total deaths per capita, which would include deaths caused by lockdowns in other states. As early as July, CDC Director Robert Redfield said of young people: “We’re seeing, sadly, far greater suicides now than we are deaths from COVID.”

Nationally, there was a 16.9 percent increase in total deaths, regardless of cause. Florida’s increase was lower at 14.8 percent. Meanwhile, New York saw a 30.1 percent spike and California’s deaths increased by 18.6 percent. Known for its appeal to retirees, Florida is home to about 4.5 million Americans aged 65 and older. Coronavirus-related deaths per 100,000 seniors in Florida are below those of New York and California, and below the national average. 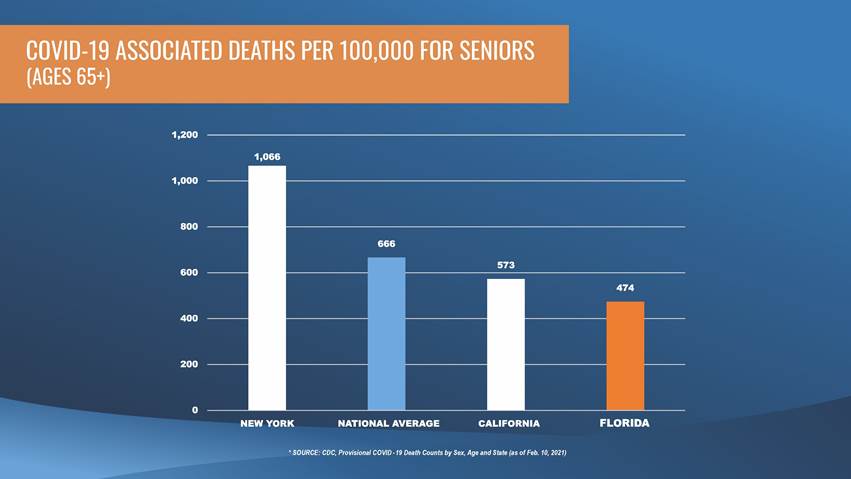 Meanwhile, almost 40 percent of Florida seniors have already received the vaccine, while other states struggle to vaccinate their elderly and most vulnerable.

Even Florida’s Democrat emergency management director Jared Moskowitz defended Republican Gov. DeSantis’ leadership against criticism from other Democrats. “It was New York that had a cover up for the last six months, and hid 50% of the nursing home deaths,” Moskowitz said on Tuesday. “We would never have gotten away with that for 15 days in Florida, let alone six months.”

Despite Florida’s proven record on fighting the virus — and the popularity of moving to the Sunshine State from other parts of the country — President Joe Biden is considering banning travel to and from Florida.

The only reason to shut down travel to Florida — where coronavirus numbers are often below average and no lockdowns have crippled the economy — is political theater. DeSantis has put the leaders of locked-down blue states to shame, and Democrat politicians are ashamed to admit it.