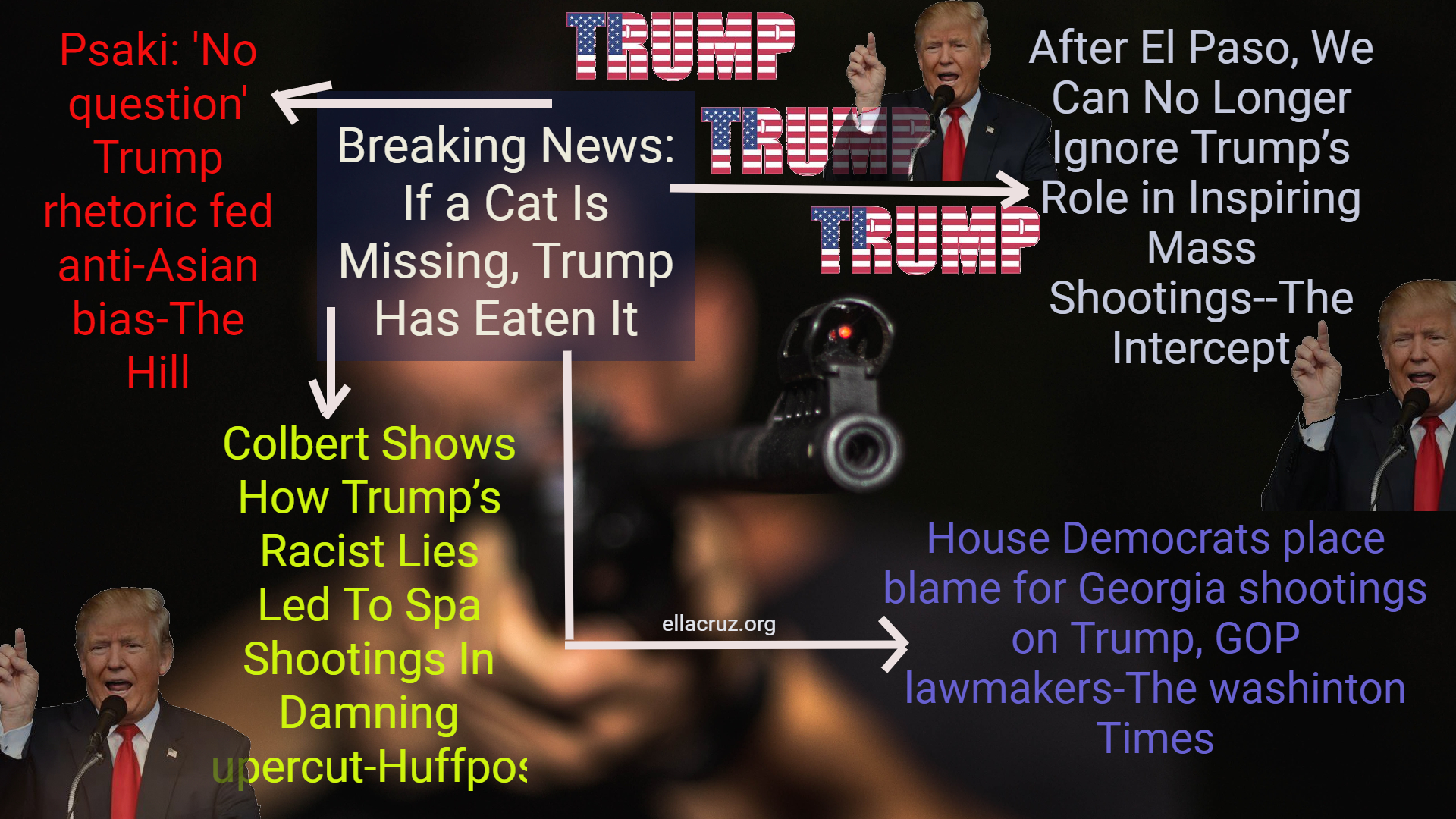 It is the Biden administration, but they blame Trump for shootings. The low-life media that is desperate for ratings and had lost its audience, sticks to any event to use the name of President Trump. He lives in their heads rent-free.

From instigating the events in Capitol Hill and characterizing them as another 9/11 to linking the Asian spa shooting, if a cat is missing, Trump has eaten it.

But make no mistake, this is carefully planned.

Do you wonder how the shootings began right after Trump left office? Well, I don’t. I was a hundred percent sure of the flood of shootings after Trump. Whether it is a planned shooting or a crazy individual, the media will blow it.  There is always a lone wolf and there are immediately gun control proposals and protests. However, this time there are two distinct goals behind these shootings debates:

1-Gun restrictions (which was always their premier goal)

Jan 6 events in Capitol by itself were carefully planned and had a specific goal to demonize Trump supporters. This is a deep schedule and Jan 6 was only the first click. The agenda behind organizing Jan 6 was declaring Trump supporters as domestic extremist terrorists. By doing that, not only our voice will be totally silenced, but we can be jailed for the crime of the way we think. Look what happens if they label us as terrorists:

Any symbol that resonates with the right will be demonized. In that case, a MAGA hat or simply, an American flag will be just as a Swastika symbol and no I am not joking. Symbols, gestures, outfits, flags, written slogans on your T-shirt, haircut, tattoo or you name it can be enough to condemn a citizen as a terrorist. Yet this, by itself, is not the whole agenda. Democrats were looking for ways to completely cancel the ability of conservatives to interact with the community. Do you want to study at a university? Apply for a job? Open a business? Run for office? Open a bank account you should comply.

They will check your background, your social media, your pictures, your expressed opinions. Besides, anything said or done by people like Donald Trump and other prominent leaders will be demonized by default. So those who believe in them will be labeled as terrorists.

Look at the pathetic news after the shooting. They are directly connecting the shooting with President Trump. Remember that the phrases used by the lamestream media are scripts written with much scrutiny in the “Media Matters Correct The Record” war room before distributing to different outlets. Remember, they use specific keywords. None of these little unworthy so-called newsmen are allowed to express words of their own. We have many times put 50 segments of different channels together and you have seen how they repeat the same keywords on certain dates.  In the Asian-spa shooting although the police have said that this shooting was not racially motivated. Instead, 21-year-old gunman Robert Aaron Long was a sex addict who went on his rampage to remove what he saw as temptation, yet these are the headlines:

After El Paso, We Can No Longer Ignore Trump’s Role in Inspiring Mass Shootings–The Intercept

Gun control is not enough for them anymore. They are after extreme confiscation both physically and mentally. They want to confiscate the conservative ABILITY to behave as part of the nation. Marginalizing by itself is not enough. They are after our identity and they are removing it layer after layer. They are de-rooting us. Plucking our minds through allegations. Look how the Trump-hater grifters blow the shootings against us and cover the murders of BLM rioters. They are now saying Trump’s “Chinese Virus” has caused an attack against Asian Americans. Man…this is just as dumb as the pizzagate shooting where they wanted to convince us that the shooter was a real shooter and the Comet den-of-dragons was really in danger… Ughhh.

Get ready, people. Get ready to be called a domestic terrorist or get your country back.