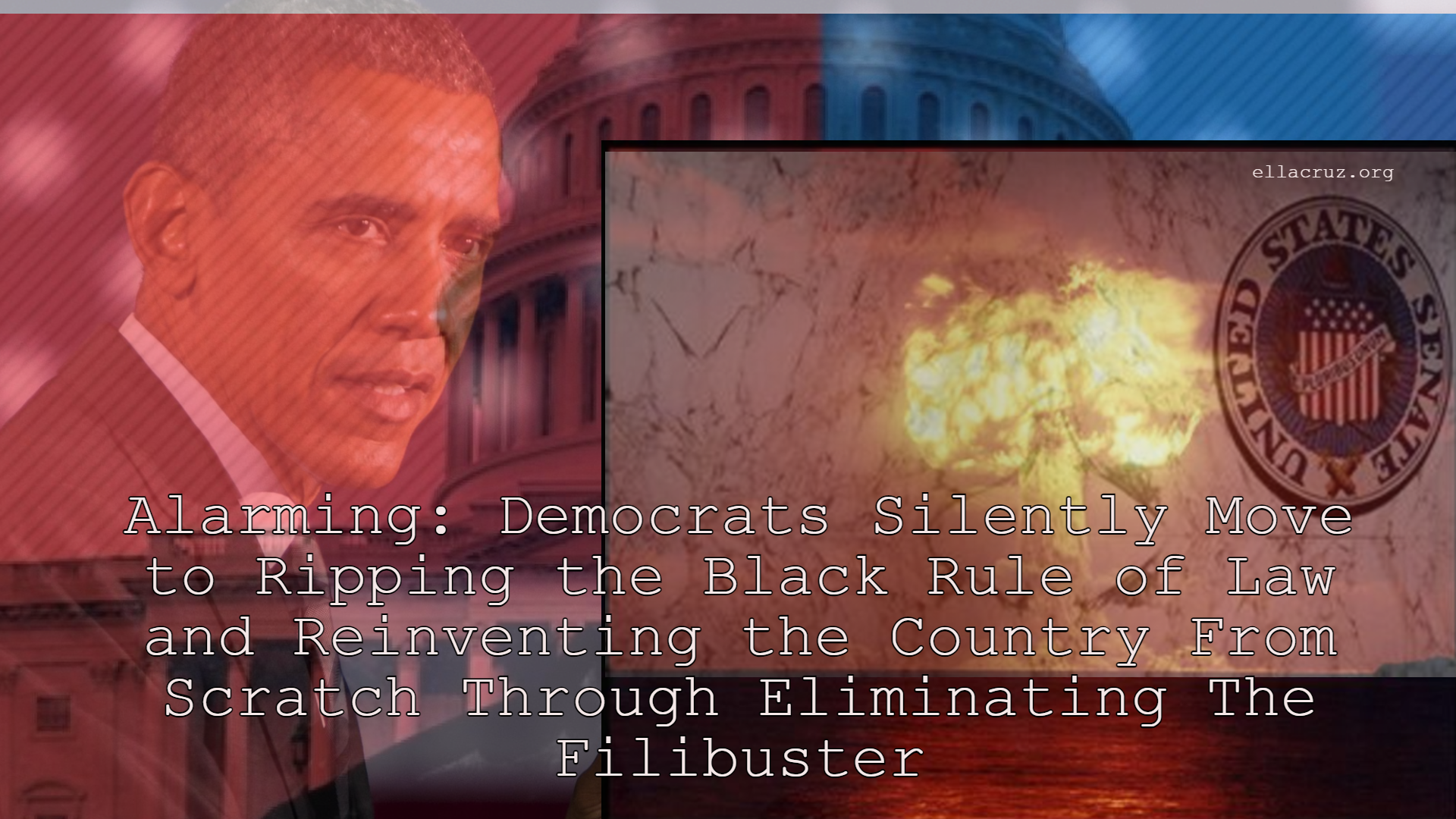 They won’t give up until they have it. Democrats want to get rid of the filibuster and they are serious.

After the flood of draconian executive orders, there are two major steps to take: Packing the Supreme court and getting rid of the filibuster and you know where it comes from:

The filibuster is a rule that allows an indefinite debate in the Senate. Anyone can debate a bill as long as they want unless a three-fifths supermajority of the members votes for ending debate through a mechanism called Cloture. The Senate has always been a place to debate on a legislative proposal as long as a Senator chose, but some abuse of the debate to just delay the process brought us to the filibuster. So now the debate on a certain proposal goes forward unless there is a strong opposition that stops it through Cloture. If a lawmaker proposes to change the country, he better be sure that 60 Senators have to confirm that change. What does that mean? That 60 people’s representatives (aka the majority of the population) agree with it.

For 240 years this supermajority was necessary. It is central to American belief. If a moronic lawmaker does not think of the consequences of his bill or tries to manipulate the system then the debate comes to hunt him. If he intends to rule by force, Senators will stop him. If legislators find their way in the Senate and attempt to grab power, Senators will stop him. This is the filibuster’s legacy.

What is the use of having two houses of law if one proposes a bill and converts it to law with no obstruction in another house?

That’s why power grabbers hate the filibuster and are desperate to eliminate it. They so despise the debate that its elimination remains the only solution and we see it not only in the House of the Senate but everywhere across the street. Just cut out the dissent’s voice and have their way is their religion. Now they need to nuke an America system that has worked for 240 years and they need to have an excuse otherwise, how can they justify the move?

Make no mistake; ending the filibuster is the high-end legislative equivalent of Antifa smashing your phone when you film them. It is just the same.

The filibuster is the last check and balance that limits the activity of the democrats. Without it, the democrats will remake the country. They will criminalize any speech/thought that doesn’t fit their agenda, turn gun owners into criminals, and declare the dissent as domestic terrorists. They told us what they would do, we just didn’t listen.

Now the recent shootings have become the vehicle for the democrat party. They are coming after your guns and this time they are really coming after them but first, they need to get rid of the filibuster, and immediately after, the flood of their gun control legislation will become law.

Article below by the Red State

Morse: Democrats Use the Boulder Shooting to Attempt a Massive Power Grab

By Brandon Morse | Mar 24, 2021 3:30 PM ET
The filibuster is all that stands between the Democrats and every radical piece of legislation they want to push. Never letting a crisis go to waste, the Democrats are using the shooting in Boulder, Colorado to push extreme gun control measures, but first, they have to get rid of the filibuster.

In the latest video, I dive into the Democrat’s plans and why the filibuster is important in stopping them.

Share
Tweet
Author's note at the end of each post: -"Your biggest problem is so small for such a big God"-Ella Cruz" The Bible is the blueprint of Faith. The New Testament has given us God’s kind of faith and the authority to perform miracles through faith and the name of Jesus. No matter what level of cancer you are; you can be healed by your faith and the word of God. Jesus did not care in what stage of death were the three people whom he raised from the dead. He just called life on them. Let see how He did it. "The first time he invaded the realm of death it was for the daughter of Jairus; an official in Jerusalem. She was “just” dead. The second time it was the son of a widow in Nain who was “one day” dead, and the third time it was Lazarus; brother of Mary and Martha in Bethany who was “very” dead after three days. HE raised them “all.” It doesn’t matter how big is your problem, and how hopeless you are because Jesus is the resurrection and the light."-Ella Cruz World's events are happening so fast. Putting Global Governance 2015, Agenda 2030, Agenda 2050, Antarctica, Mars, CERN, G5, The United Nations, The European Union, the Club of Rome, and the false prophets of the Vatican all together, we see that the satanic global government is imminent and it shall come to pass. The mark of the beast will be obligatory. You are either a Christian and believe this because this is what was predicted 2000 years ago in the Bible, or you are not a Christian but you read all these articles and connect the dots to notice that the satanic world government is their agenda and with President Trump, we had 4 years and this was God's mercy on us. Their Global Governance 2025 is terribly close. Their Green New Deal's 12 years matches the agenda 2030. The immigration and devouring of America and Europe all go according to the blueprint of one world satanic government. We have a short time to prepare ourselves. Why are we, born-again Christians happy and calm? Why do we joyfully dedicate ourselves to the nation, knowing that we will be chased and prosecuted for NOT taking the mark of the beast? Because we are dedicated to the Kingdom. "Your kingdom come, Your will be done." 1- We believe Jesus Christ is the son of the Living God. 2- We believe the Bible is the word of God. 3-We believe God had so much loved us that HE sent his only begotten son to die on the cross for our sins. Through his blood, all our sins are washed away and forgiven. 4- We believe the price of our salvation, health, prosperity, happiness, and eternal life is paid by the blood of Jesus. We have all these gifts in us when we are born again by GRACE. By his stripes, we are healed 2000 years ago. 5-We believe by accepting Jesus Christ as our savior, we open our hearts to the Holy Spirit. We are baptized by the Holy Spirit who will dwell in us and will reveal Himself through dreams, visions, speeches, videos, books to communicate with us, immediately after our Salvation. 6- We believe Jesus is the same yesterday, today, and forever. We believe born-again believers receive the same DNA as Jesus Christ with the same miraculous abilities through faith. Just as the Apostles performed the same signs and wonders as our Lord Jesus did. They did it through "faith," and The Lord will accomplish the same miracles through us after we accept him as our savior. 7-We condemn the religion and many fake prophets of the Vatican (not all of our Catholic brothers and sisters) who deceived Christians for centuries and hid the true message of the Bible and the Good News from people to keep themselves in power. We welcome all denominations. 8- We believe that a born-again Christian never dies and the moment his life on earth is terminated, he is promoted to heaven. There is no death for us. We just transit to our new dimension which is filled with immerse, joy, love, peace, and glory of God. All people who have met Jesus in a visit, vision, dream, or have died for a short time, left their body and came back, know how does this experience feel. It is a divine relief and joy. Therefore, to answer the above question (why are we happy?), our answer is, we can happily die right now. In fact, we would love to die yesterday and go home but each one of us has a mission and purpose that the Holy Spirit has revealed to us after our born-again experience. For the sake of that mission, although we know our day of prosecution will come, we are joyful and relaxed in the spirit. Because we save people by preaching the Gospel and bringing them to Jesus. To be born again, you just need to say: Lord Jesus, I accept you as my personal savior, Come to my heart, Forgive my sins, Wash me away, Make me a new person, And live inside of me. In the Name of Jesus from Nazareth, Amen. And that's it. You are saved. He will reveal himself to you. Your life will dramatically change. Your marriage, your health (especially addiction), your finances, and all areas of your life will experience this extraordinary change. And never look back. In Jesus Almighty name. Amen.