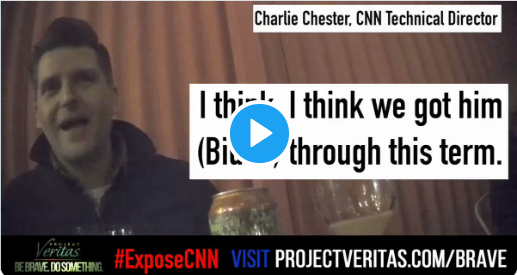 ‘We Got Trump Out’: CNN Technical Director Admits Network Created ‘Propaganda’ to Get Biden Elected

“I think, I think we got him (Biden) through this term,” Chester said on the hidden camera video.

“We would always show shots of him jogging… Him in his aviator shades, like you paint him (Biden) as a young geriatric,” he added.

Chester also explained how they would fabricate news stories about Trump while ignoring the many scandals coming from Biden’s campaign.

“We were creating a story there that we didn’t know anything about, ya know? That’s what – that’s what I think, that’s propaganda,” he said.

He said that CNN will be using “fear” on their next campaign to sell the masses on the evils of climate change.

“Our focus was to get Trump out of office, right? Without saying it, that’s what it was, right? So our next thing is going to be for climate change awareness,” Chester said.

“No one ever says those things out loud, but it’s obvious,” he added.

The full clip can be seen here:

BREAKING: Part 1 – @CNN Director ADMITS Network Engaged in ‘Propaganda’ to Remove Trump from Presidency … ‘Our Focus Was to Get Trump Out of Office’ … ‘I Came to CNN Because I Wanted to Be a Part of That’

Big League Politics has reported on CNN’s incredible left-wing bias coming from the top of the network:

“CNN President Jeff Zucker can be heard instructing the network’s personnel not to cover the bombshell Hunter Biden laptop story in leaked conference calls in October, ensuring that the network’s audience wouldn’t hear of the evidence documenting the corrupt foreign business dealings of Joe Biden’s son in Ukraine.

Wednesday’s release is the latest of Project Veritas’s #CNNTapes. James O’Keefe of the whistleblower organization confronted Zucker on CNN’s daily conference call on Tuesday, revealing to the corporate media operative that the medium had been compromised.

CNN Vice President and political director David Chalian more openly places a lid on the bombshell story in the leaked conference call, glossing over the reports of Biden family corruption and stating it was “obvious” that CNN wouldn’t cover it.

“Obviously we’re not going with the New York Post story right now on Hunter Biden, which seems to be giving its marching orders to Fox News and the right wing echo chamber and what to talk about today…”

Another CNN Vice President, David Vigilante, questions why any corporate media reporters are retweeting the story at all, suggesting it should be completely and totally ignored.

“What in the world are Maggie Haberman and Jake Sherman doing retweeting that story?”’

CNN is an unabashed propaganda mill that works against the interests of the American people, and this Project Veritas revelation proves it. We will continue to report on this series as it develops.