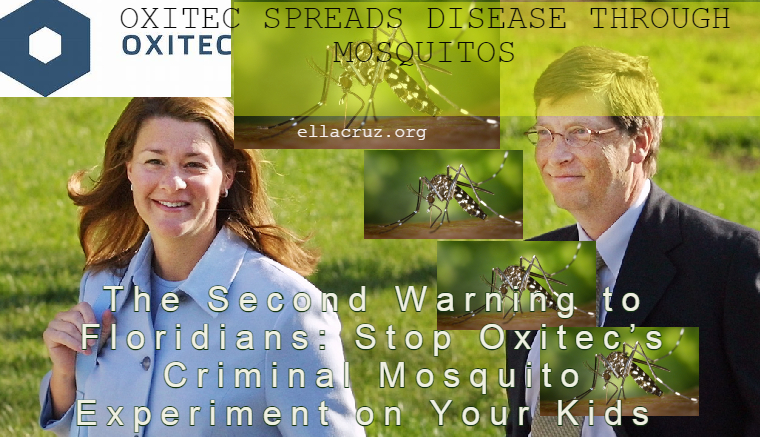 Please read this article before going through the RT’s because, without a background, it is hard to understand how Oxitec and Bill Gate’s mosquitos operate. We the people are living in a movie directed by other people. Entities who control the sun, the sky, land, water, and mosquitos are now claiming what they were controlling for years demanding our extinction. RT’s article explains how Oxitec is going to release the mosquitos in Florida AGAIN, and I can not emphasize enough how dangerous this is so, read Zika Pandemic before reading RT’s. I once more warn Floridians. Move fast and do something as long as you have de Santis. You do not know who will be the next governor. With what happened in 2020, there are no safe elections anymore. Just move fast and stop this criminal experiment on your kids. Demand the closure of Oxitec all around the world.

Breaking News: Bill Gates Did The Same Thing With The Zika Pandemic; Zika Vaccine was Patented 7 Months Prior To The WHO Pandemic–Massive Article (Warning To Floridians)

Get short URL
FILE PHOTO: An Aedes aegypti mosquito is pictured on a leaf in San Jose, Costa Rica. ©  Reuters / Juan Carlos Ulate
A plan to release thousands of genetically modified mosquitoes in an effort to combat disease in the Florida Keys has triggered dire concerns among locals, some saying the “criminal” experiment will turn them into guinea pigs.

Spearheaded by the Florida Keys Mosquito Control District (FKMCD) and Oxitec, a British biotech firm that’s received backing from the Bill and Melinda Gates Foundation, the project aims to turn the first swarms of gene-edited bugs loose into the Keys starting sometime this week, the two bodies announced in a joint statement.

For the first leg of the plan, set to be expanded later, mosquito boxes will be placed at six locations, which over 12 weeks will release around 144,000 Aedes aegypti mosquitoes, a species most closely linked with transmitting illnesses such as dengue, Zika and yellow fever. If all goes according to plan, the male, non-biting bugs will mate with local biting females, whose female offspring are programmed to die off, helping to control the Aedes aegypti population and reduce the spread of disease.

While the particular species makes up only about 4% of the overall population in the Keys, it is behind “virtually all” mosquito-borne diseases passed to humans, as well as some that are transmitted to animals, such as heartworm, according to Oxitec.

Approved by the Environmental Protection Agency last May under an Experimental Use Permit, the project also seeks to cut down on the use of chemical pesticides, which can be harmful to local wildlife. However, while Oxitec presented that as a major perk in selling the plan to local leaders, the mosquito control board has so far given no indication of any plans to reduce pesticide usage.

The UK-based firm, founded in 2002 at Oxford University, also claims that public support for the plan “remains high,” even as locals voice extreme skepticism, some directly to community leaders.

“We may not be scientists, but we read. And what Oxitec says and what we’re reading from other sources are two completely different things,” one concerned resident, Meagan Hull, said at a March village council meeting, adding “I beg you, I implore you to take immediate action [and] consider a resolution against this technology.”

Another local similarly said she was “incredibly concerned” that the plan is moving ahead, pointing to risk that biting gene-hacked female mosquitoes would emerge in the community.

“Everybody says that’s not going to happen, but I don’t trust that,” she said, also suggesting a “lack of transparency” from Oxitec and the government agencies involved.

“I hear other people say we’re being made into guinea pigs. Maybe we are… I just don’t know that it’s ready for prime time yet,” he said.

The mosquito control board, however, insists on the need to improve its control methods due to pesticide resistance developing in disease-carrying bugs, saying the Oxitec project could provide new tools that are “safe, environmentally friendly, and targeted.”

Oxitec is no stranger to genetically modified blood-suckers, having already released more than a billion bugs across South America and the Caribbean, such as a 27-month-long experiment in Brazil in 2013 that sought to cut the local mosquito population by 90%. Like the initiative in the Keys, offspring from the GM mosquitoes were meant to die off in Brazil, however Oxitec came under fire in 2019 after researchers published a study alleging that the bugs were reproducing, finding that up to 60% of mosquitoes analyzed contained traces of modified genes.

While the company later disputed those findings, insisting the experiment went as planned, other Oxitec efforts have also been subject to criticism. A like project in the Cayman Islands was terminated in 2018 after local officials concluded it had failed, with Health Minister Dwayne Seymour saying the plan “wasn’t getting the results that we thought we could get.”

Months before its Cayman Islands contract fell through, the company announced a partnership with the Bill and Melinda Gates Foundation to produce similar “friendly” and “self-limiting” mosquitoes, this time for the Anopheles species, which spread malaria. Since then, Oxitec has raked in just shy of $8.5 million from Gates, according to the foundation’s financial records, receiving more than $1.2 million so far in 2021 alone. It is unclear whether any of those funds were devoted to the Florida Keys plan.